If you have a BMW 3 series or Z3 with a Downing Atlanta supercharger kit fitted (DASC), at some point you are going to need to replace some parts. I have been researching what the replacement parts are.

The filter that comes with kits for some models is a K&N filter that can be cleaned and re-oiled. Should you wish to replace it the model number is RU-0950.

Replacements are not available. Someone asked Downing Atlanta and was told, "Go with an aftermarket FMU and set it to 60psi at 6lbs."

I found some instructions for adjusting the regulator on a forum.

1) Install a fuel pressure gauge which goes to 100psi between the fuel rail and RRFPR.
2) Start car. Use some blunt pliers and crimp the line between the fuel pressure gauge and RRFPR. Check pressure reaches 100psi and then release. Don't hold it at that pressure long. This checks the fuel pump can reach the needed pressure.
3) The pressures we are looking for are about:
40 psi at idle, 18 inHg vacuum
50 psi at 0 psi boost
75-90 psi at 8 psi boost
Screw the top screw in to get the fuel pressure to increase. You can check the pressure at 0 psi by removing the small hose that goes to the top of the RRFPR. Leave the RRFPR open to atmosphere, and plug the end that goes to the manifold up.

This will vary depending on engine, but for the M44 engine the replacement serpentine belt is Gates K060863 (6PK2191, originally supplied with the kit).

I found a post on a forum that says a Jaguar part may be suitable as a replacement.

There is a Jaguar "Bypass Actuator" that looks very similar. Part number is AJ83833. This suits Jaguar XK, XK8 and XKR models. Some modification may be required for this to fit.

It is worth investigating this part if you need to replace your bypass valve.

I hope no one ever needs to replace the supercharger itself, but it may help to know that it is an Eaton M62 (generation III).

There are rebuild kits available for these superchargers.

On my car the pulleys had been replaced with metal ones with replaceable bearings. The pulleys are 60mm diameter and 30mm wide.

Greg from Atlanta Z3 Club says that he has had a pulley remanufactured with permission from Downing Atlanta. They are the same manufacturer with upgraded bearings. Contact Greg through the altlantaz3.com website.

The original top hose supplied with the kit is a Gates 21673.

Some people have found different hoses that suit them better, such as Gates 21623 or Goodyear 61417.

Some people have suggested fitting a "check valve" between the air shrouded injectors inlet pipe and the intake bellows. This is to prevent loss of boost through this pipe. Some of the valves mentioned for this job are NAPA 2-29000, CRB-2979, MPF-3879, AV-23 and Sorensen 779-2929.

As an option to the original crankcase ventilation valve, some people suggest fitting a PCV from a Chevrolet 348 PCV instead. 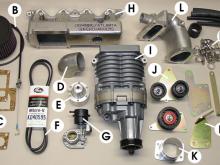