In 1998, near the end of the E36 life, BMW Australia introduced a limited edition version of the 318is called the "Sport".

Being the last of the series, they had stability and traction control and side airbags which were mounted in the doors.

One of the main features of the Sport was the M3 style body kit, including front and rear bumpers, side skirts, and side mouldings. The only obvious difference between M3 and 318is Sport was that the front bumper on the Sport had horizontal bars as opposed to the mesh insert on the M3, and the wheels which were 16" radial styling (style 32) with 225/50 tyres.

Clear indicator lenses were also fitted. Sport models were available in a limited range of colours, including some not available before. There were two shades of black, a silver, Avus Blue and, probably the rarest colour, Sierra Red.

Inside, Sport models had half cloth/half suede leather sports seats available in two colours - red or blue. The rear seats were fitted with head restraints. Black headlining and pillar trim was used, instead of the usual grey.

Mechanically there were no changes over the regular 318is.

I have seen some Sport models with additional options like full black leather, rear spoiler, and different console trim. Also, despite the mention of the M Sports steering wheel in the brochure for this model, my own 1998 Sport came with the regular 3-spoke steering wheel.

Below is a six-page brochure produced by BMW Australia for the Sport. 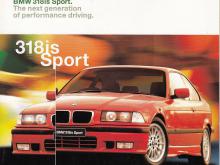 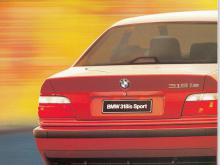 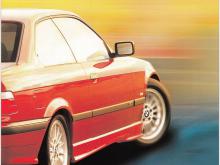 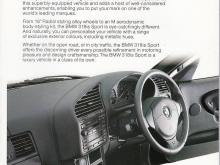 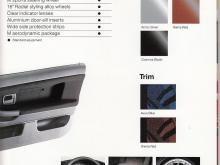 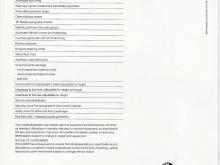 I've also seen this brochure referring to the 318is Motorsport which looks the same as the Sport but four-door. Not sure if this is an Australian brochure or not - it is possibly New Zealand. I would like to see a copy if anyone can help. 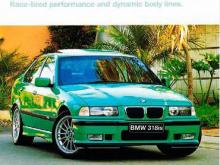