Reproduced from the BMW TIS.

With the introduction of the 1993 E34 and E36 models, a revised version of the M50 engine is also introduced. The revised four valve, six cylinder engine is designated M50 TU (Technical Update). 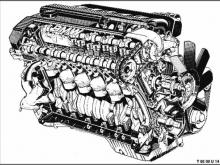 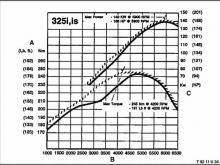 The following chart details the most significant improvements over the previous DME M3.1 system used on the M50.

The knock control system adjusts the ignition timing sufficiently to avoid engine knock and will allow the engine to run satisfactorily (but with reduced power) on fuel of a lower octane rating than the recommended fuel grade. Thus, if the owner accidently gets a tank of lower octane gasoline, the engine will not be damaged.

One of the most important design changes introduced on the M50 TU engine is the use of the variable camshaft control system (VANOS). This system improves the engine's mid-range torque output, reduces exhaust emissions, increases throttle response, and improves idle quality by varying the intake valve timing (camshaft position) during operation. VANOS is controlled by the latest Digital Motor Electronics Management System designated DME 3.3.1, depending on engine load, speed and temperature inputs.

Extensive tests were carried out using various intake camshafts and timing intervals to determine the ideal valve spread angles. The spread angles used on the M50 TU are 110° in the retard position and 85° in the advanced position. The intake and exhaust valve lift is 9.0 millimeters.

New components incorporated for VANOS include:
· Intake camshaft with helical-cut teeth on the front.
· Timing chain sprocket with internally cut helical teeth.
· Hydro-mechanical camshaft adjusting unit with hydraulic piston and a gear which has helical-cut teeth inside and out. The Hydro-mechanical camshaft adjusting unit is located in a pressure-cast aluminum housing on the cylinder head in front of the intake camshaft.
· Electromagnetic (solenoid) valve.
· Oil pressure connecting line from the rear of the oil filter housing to the electromagnetic (solenoid) valve.
· Actuating and diagnosis electronics in the DME M3.3.1 engine control module. 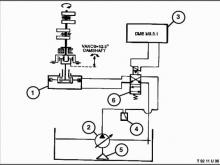 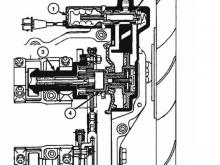 The engine control module energizes the solenoid valve which allows engine oil to flow to one of two sides of the piston in the Hydro-mechanical camshaft adjusting unit. The engine oil pressure moves and holds the piston at one of its two mechanical stops. A gear wheel with a shaft rotates inside the hydraulic piston. It converts the piston stroke by way of helical-cut teeth into rotary movement of the camshaft which is relative to the driven sprocket. 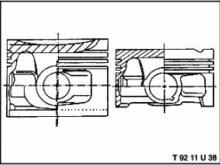 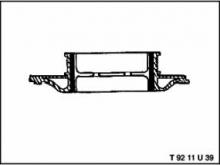 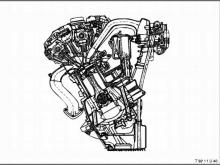 The weight of the hydraulic tappets, upper valve spring retaining plates and valve retainers has been reduced resulting in lower internal friction.