The M44 engine was introduced at the beginning of 1996. Based on the M42 engine, the M44's larger displacement is the result of boring and stroking the cylinder dimensions of the M42. Although peak power remains unchanged from the M42, the M44 boasts an improvement of 5 Newton-metres of peak torque at an engine speed 200 rpm lower than its predecessor.

1. The crankshaft is now a spheroidal-cast type with four counterweights instead of a forged steel type with eight counterweights
2. Connecting rods and pistons were redesigned for improved NVH
3. Conical valve springs were used in place of cylindrical valve springs
4. The upper valve plate has been reduced in size
5. Balance weights in the camshafts were now cast with the camshafts themselves
6. The timing chain tensioner was redesigned to reduce wear
7. The DME engine management system changed from M1.7 to M5.2
8. Induction roar has been reduced by adoption of a sound-insulating cross-flow hose in the intake system as well as an intake silencer

The new engine is said to be quieter and more fuel efficient as well as offering significantly enhanced torque. Friction in the valve train has been reduced by 70% over the M42 engine. 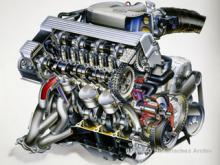