The S40/V40 range was released in Australia in February 1997 and was initially available with a 2.0-litre normally-aspirated engine.

The press were very critical of how the S40/V40 rode and handled which prompted Volvo to make substantial changes to the chassis and suspension. Models from September 1997 were updated with revised suspension (rear: revised springs and dampers, new trailing arm bushes, upper and lower links and lower control arm bushes; front: revised springs and dampers, new bushes and revised geometry), and bigger front brakes (281mm instead of 256mm) with stiffer calipers and pipes and a larger master cylinder.

A high-performance turbocharged model badged T4 became available from October 1997, initially as a manual only, but with an automatic transmission option from January 1998. The T4 was fitted with a 1.9-litre high-pressure turbocharged engine based on the 5-cylinder engine from the 850 T5 and with the M56 manual gearbox from the same model.

The T4 could be differentiated from the non-turbo models by different headlights, subtle plastic wheel arch extensions and an oval exhaust tip. Inside it had a a trip computer which included a new digital display in the instrument cluster. The model also came with traction control to control the significant engine output being delivered to the front wheels.

In February 1998 the T model was released, with a more civilised low-pressure turbocharged engine.

There were minor changes from January 1999. These cars can be identified by an ambient temperature gauge.

For the 2000 model year, all models now came standard with air conditioning, central locking and heated side mirrors. "Home safe lighting", a cabin filter and Volvo's WHIPS (whiplash protection system) were also added to the range.

In March 2000 a limited edition Super Touring model was introduced. Available as S40 or V40 T4 SE, these were available in a bright yellow colour with unique "Ares" 16-inch wheels. Other less attention-grabbing colour options of silver or black were available.

The facelifted "Phase 2" model was introduced in Australia in August 2000. These featured fresher styling including new headlights, taillights and flared front guards.

Remote locking was standard across the range and the keys were to changed to a new folding type key.

Turbo engines were updated with the low friction upgrades and variable valve timing that had been introduced to the non-turbo engines earlier. The T4 engine increased in size from 1.9-litres to 2.0-litres.

The suspension was further improved with a wider track and longer wheelbase and a five-speed automatic transmission was now available.

In April 2001 the 1.8-litre and T4 models were discontinued and a manual transmission was now only offered on the base model, but was available as a special order on other models.

In June 2003 Volvo introduced a limited edition AKTIV model which included A$7,000 worth of extra for $2,500 more. The extras were 15" "Vogon" alloy wheels, black-blend dual headlights, front fog lights, rear spoiler, leather upholstery and wood trim. The AKITV came in only Black Sapphire, Titanium or Silver.

The series then ran unchanged until May 2004 when it was replaced by the second generation S40/V50 built on the Ford C1 platform.

All engines use a timing belt that needs replacing every 125,000 km or eight years.

The variable valve timing system fitted to later models can be problematic. 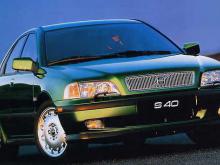