Already in its first year, the dynamic Volvo S40 and V40 have developed some muscles and is now being launched in the T4 version. With an exciting combination of torque and traction, the spirited S40 and V40 T4 differs from the normally-aspirated versions through clever use of turbocharging. Underneath the exterior, there are finely tuned components to match the performance.

The Volvo S40 and V40 T4 is the mid-size performer which is going to take on the competition in the 2-litre upper-class segment where sparkling performance and driving fun play a major role alongside safety, comfort and high quality.

Having been very good sellers for well over a year in 2-litre, 1.8-litre and 1.6-litre normally-aspirated petrol versions and a 1.9-litre turbo-diesel, the range is now being extended to include the 1.9-litre petrol-engined turbo version, the T4.

The designation follows that of the larger sister model, the S70/V70 T5.

With 200 bhp and a massive 300 Nm on tap already from 2400 rpm, the 1.9-litre turbocharged S40 and V40 are potent performers. Smooth power delivery across a wide range improves driveability and gives the car well-mannered behaviour.

In terms of pure figures, this means that 100 kph from standstill takes a mere 7.3 seconds and the top speed is a more than adequate 235 kph.

Power and torque are transmitted to the wheels through a Volvo M56 5-speed gearbox - the same as in the S70/V70 and with very smooth and precise operation - and the Dynamic Stability Assistance (DSA) system. The DSA system is a traction control device which gives the car full directional stability and maximum road grip. The 16-inch 205/50ZR tyres improve traction and comfort.

With its ”Dynamic” chassis setting - one of three choices for the S40/V40 models - the T4 offers a suspension which is perfectly matched to the characteristics of the car; the optimum combination of dynamic capability and comfort.

All three suspension alternatives share a sophisticated and well-dimensioned braking system which creates a very reassuring feeling in all kinds of braking conditions.

The precise and responsive power assisted rack-and-pinion steering has been even more finely tuned in order to really produce that responding feeling to driver’s input.

Large discs, ventilated up front, and a king-size booster provide a shorter stopping distance with a shorter pedal travel and light pedal pressure.

The braking system, which belongs to the latest generation in ABS development, also features EBD, Electronic Brake Distribution, which always permits full use of the brakes while retaining stability and the ability to steer.

The safety level (dynamic and crash safety) is one of the very best with a predictable well-mannered dynamic behaviour in combination with a solid and cleverly-designed structure, offering a high level of protection in crashes of all types; large crumple zones and the effective SIPS system which naturally includes side airbags for the front seats. Soft seat belts that have been specially developed to interact in an optimum way with the airbag function are also part of the package.

The exterior and interior design of the Volvo S40 and V40 effectively reflects the combination of tradition, innovation and a clear identity. All of which have been carefully cultivated to give these cars the new Volvo look.

Not only does the car radiate this attractive and modern look, it also tells the world that it is powerful. The T4 versions sit lower on their wider wheels than their normally-aspirated sister models.

From the front, with its characteristic free-form headlights, to the large oval exhaust, the car clearly hints at properties such as high power potential, dynamism, performance and driving fun. Flair and the fun have been added to a sound and practical base without sacrificing any important characteristics such as driveability and ease of use.

The Volvo S40 and V40 T4 is well-equipped already in standard form, but it also offers a variety of options and choices to enable every customer to create a personally-designed car.

The T4 comes in a variety of colours, including the new Summer Green and Autumn Gold. The five-door version, the V40, also features a rear spoiler.

On the inside, the different trim colours can be combined and mixed with a selection of materials and cuts. Maximum personality is created by the choice of Art Leather, a hand-decorated leather trim unique to each car and carried out by a professional artist.

Attention to detail, like a foldable and adjustable centre armrest between the front seats and power seats, increases comfort and simplifies use.

The dynamic and powerful S40 and V40 T4 is an exciting addition to the competitive mid-size range of Volvo cars. A model range which now stretches from a 1.6-litre, 105 bhp basic model to a 200 bhp entertainer. Four and five doors. Well-balanced, practical and safe.

The fact that it also proves itself on racing circuits only serves to underline the great capability of the S40 and V40. 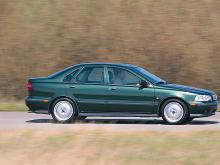 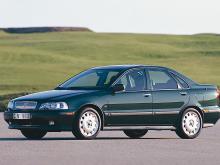 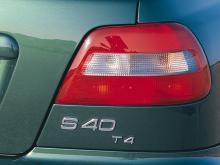