This is Volvo's replacement for the ageing 440 hatch. And yes, it is disguised ... under the boxy add-ons is a rakish five door hatch, code­named V40 and developed joint­ly with Mitsubishi.

Styled by Volvo's Peter Hor­bury, V40 - expected to be sold as the Volvo 540 - shares plat­form and glasshouse with Mitsubishi's forthcoming Euro­pean Lancer replacement.

Eighty per cent of manufacturing operations are shared, and production streamlining will cut the V40's build time at the Dutch NedCar plant to 17 hours - 11 hours less than the current 440.

V40 is expected to go on sale in Europe early 1996, with Australian versions due later that year or early 1997. 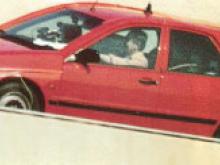