Article from Motor (Australia) magazine, May 1996

Volvo makes no bones about its ambitions for the new S40 sedan and V40 estate. Brimming with confidence following the success of the 850, it says the new cars are genuine rivals to cars like the Audi A4 and BMW 3-series. It's a bold claim and judging by our first encounter, we get the feeling Volvo may have set its sights a little too high.

That is not to say there is any fundamental flaws with the two new-comers, but when you compare them with the A4 and 3-series they are found wanting in the very areas that matter most to discerning drivers - performance and dynamics.

The most striking feature when you see them up close is their cohesive styling. For the first time in years the Volvo design team, headed by Brit Peter Horbury, has delivered a model line that has real aesthetic appeal.

The V40 is the stunner of the two. Like its main European rivals it forgoes potential load space and wagon looks for sleek hatch styling.

Volvo eventually plans to offer the S40/V40 with a host of petrol and diesel engines, including a turbocharged, 16-valve, 2.0-litre, four-cylinder pumping out close to 130kW. For the first 12 months, though, it will rely on two naturally-aspirated, multi­point fuel injected, DOHC, 16- valve four-cylinder units: a 1.8- litre developing 86kW and a 2.0- litre good for 102kW.

Neither engine feels particu­larly happy when worked hard due to relatively high levels of noise and vibration at mid-to-­high revs, but with 165Nm at 4500rpm and 183Nm at 41 OOrpm respectively, they manage to haul the new Volvos along at a respectable, if not spectacular, clip.

Volvos says it has engineered the S40/V40 to provide "dynamic driving enjoyment" by incorporating many of the chassis tweaking lessons learned during the development of the wicked 850R. Their MacPherson strut (front) and multi-link (rear) suspension and power-assisted rack and pinion steering provides safe and predictable handling, but ultimately both come nowhere near matching the A4 and 3-series in terms of overall balance and stability.

Having established a solid reputation for safety, Volvo claims the S40/V40 conform to the same stringent safety standards as the 850 despite being 190mm shorter overall.

Volvo says its new-comers have more usable space than the A4 and 3-series, and going by the size of the boot we would have to agree. The V40 might not be the most spacious estate car going around, but is still offers a good deal of usable space considering its compact dimensions.

If Volvo Australia can price them at around the $42,000 mark they will have every chance of succeeding when they arrive at the end of the year. Any more than that and the competition becomes too intense for these Gothenburg twins. 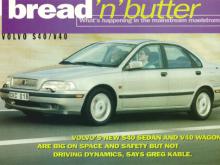 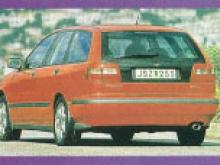