Once hard-edged, Volvo has softened its corporate lines on the S40. But the S isn't quite up to speed through the esses yet, says Bob Hall.

<B>A Merry Worker from inside the building being used as a backdrop wandered out to see what was going on. Eyeballing the new S40 Volvo from the land of the Polders, this fellow took a careful walk around the car, peeked inside and eventually noticed the grille.

"Legal? Well, it hasn't been released yet, but it is licensed and is going on sale soon."

"No, no. I mean is it legal for Volvo to make a great looking car?"

"Well, ah, it is now. Some legislation was passed about a week ago. Yeah, they changed the Swedish constitution."

Actually, it mightn't be that tough for Volvo to discover a modicum of style. Peter Horbury, the fella in Volvo Design's equivalent of The Lodge has been seeing to that. The S40 is the first production Volvo to put tyre to bitumen under his stewardship. And it's a damn good piece of work, too. Not only from a styling perspective, but as a car.

In every area the S40 is better by a couple orders of magnitude than the largely unloved 440 it replaces.[/B]

As we drove the S40 with an optional 'SE' package, (there's a V40 wagon version also on offer), it's a smartly packaged and presented car - more than a match on these terms for Audi's A4 and a capable alternative to BMW's exalted 3 Series, at least in entry-level models.

There are two ways to look as the S40; in reference to the car it replaced - the unloved 440 - and as a new entrant in a competitive class. As the forn1er, the S40 is a shot for six. Against the likes of the Audi A4, BMW 318i and Peugeot 406, it's not quite the star performer it is in Volvoland, but unlike the 440 it doesn't have to hide its head against a brace of particularly tough competitors.

In many respects, the development of the S40 is a tidy example of the degree of internationalisation the motor industry has undertaken. With a pleasant Pom heading up a sensible Swedish outfit's design studio for a car to be built in a dandy Dutch plant with a jolly Japanese partner, the ten11 international might be a bit of an understatement.

The presence of the Japanese partner is likely to go unnoticed as regards to substance, though probably not in terms of build quality. The plant also builds the Mitsubishi Carisma. Basic suspension geometry as well as much of the architecture of the floorpan and toeboard is common to the Swedish-badged sedan and wagon and the Japanese-badged sedan and hatchback, though powertrains are specific to each nan1eplate.

The S40's engine is 4/5ths of the 2.5-litre twincam four valver seen under the bonnet of a Volvo 850 (whoops, make that an S70) near you. With 103kW on tap and 183Nm, the output of the Volvo four is about mid-pack among modern multi valve fours. The peak torque figure appears as 4500rpm, but the engine develops plenty of torque in the 250003000rpm range and easily lopes around town in third or even fourth and still pulls strongly. The engine's torque delivery, rather than ability to squeeze kilowatts out of petrol, is the strong point, and excellent drivability is a result. Though it gets coarse when wound out towards redline, the engine works better in the car than Audi's five-valve 1.8, and not surprisingly feels torquier than the 318i's single-cam four.

The gearchange in our manual S40 was pretty average in absolute terms, though not bad for a front-driver. There's a slight notchiness to the change that gives it a completely different feel to that of the Audi A4 (itself spoilt by a change which is too light and lacking in precision).

Of course, an automatic is available for the shiftless, at the near usual $2000 ask added to the bottom line, and with the same debilitating effect one can expect from a self-shifter coupled to a 2.0 litre engine in a 1210kg car.

Our wheel time with the S40 coincided with the wettest week New South Wales had seen in yonks, so dry-weather dynamics are still a bit of an educated guess to us. However, we don't want to dampen the interest of those who - like us - are fascinated and curious about a Volvo that looks like a car, rather than the box the car was shipped in.

Ride and handling are a world apart from the old 440. The front suspension is far more competent in the wet than the 440 - a particularly nasty beast when power was applied and it works with the rear suspension now. We pressed the S40 with the (standard) traction control both on and off trying to get it to do something untoward, and it remained well-mannered in spite of the nasty meteorological conditions.

The SE package brings a sportier suspension tune along with alloys and Goodyear NCT3 tyres. Unlike the Luxembourg-moulded NCT3s on Ford's Mondeo, these French-made NCTs are reasonably quiet on our coarse-chip bitumen and they're not especially harsh on their relatively low (55 percent) section height. They're about average in the wet, however, and in overall terms the chassis lacks the ride fluency of a Peugeot 406 or the nimble feel of a 3 Series.

Steering is excellent, a quick 2.8 turns lock-to-lock, and airbag mass is not intrusive to response or feel. This may be the best tiller we've encountered in a Volvo, iced or otherwise.

Despite the good steering, the S40 is not a particularly fun car to tootle about the same sort of winding roads which can be so much fun in a 3 Series. Competent, yes. It has above average abilities, but there's a certain lack of spirit here.

Maybe the S40's spirit will come to the fore in drier times.

When you drop into the leather-faced driver's seat (delightfully aromatic leather's standard with the SE option pack along with climate control air-con, cruise, and in-dash

CD player, alloys and woodish interior trim appliques) you slide into a world that is most un Volvo-like.

The shapes of the dash, instrument cluster and items like the fresh air registers are soft, modem and exceedingly well tailored -like a piece of modem Scandinavian furniture. The interior is a light shade of grey, with instrument faces, switches and press buttons in variations of the base tone.

The audio system and the steering wheel (along with the grille) are the only overtly Volvo design elements on or in the car. As aforementioned, the SE also gets realistic-looking woodoid trim on the dash, centre console and door trims. The bits on the doors have some very un-Volvolike curves in them.

The driver's seat has separate adjustment for lifting and/or lowering the front and back of the cushion, Volvo's traditional knurled wheel for lumbar adjustment and a Keiper-type infinitely-variable backrest reclining mechanism. The steering wheel's also height adjustable, so there's plenty of scope for folks of above-average size to get comfortable. Front seat comfort is, as expected from Volvo, excellent.

Things in the rear don't match the front, although they are better than an A4 and 3 Series. Comfort and ambience are not the problem, though rear occupants with longer torsos may find the rear door openings on the small side.

The Nedcar Volvo-Mitsubishi plant has certainly raised its game. Material quality, fit and finish of the S40 are more in line with BMW than they are Volvo. Presentation quality is even better than the high-end Swedish Volvos. Things weren't always this good for the S40. At start-up well over a year ago, quality was ordinary. Of course, when you pony up the $47,950 for a S40 SE manual, the last thing you want is indifferent build. Even the base S40's $43,950 sticker is above the price points where good enough will do.

Though not the sporting drive that the 3 Series is, the S40 is a fair match against the A4 while it handily beats the sluggish 406. Volvo has discovered curves, awfully good-looking ones, and has applied them liberally to the S40. If only the S40 would devote itself wholeheartedly to the ones on the road. 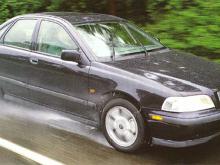 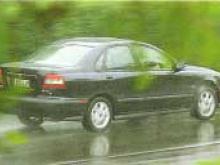 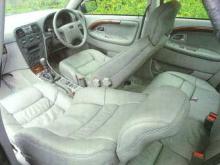 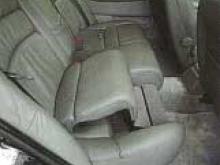 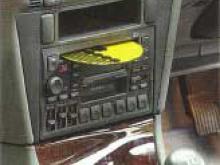