Take off the hat and jump out of the box ... it's crunch time and Volvo is looking to the future with an all-new compact luxury vehicle.

They're still as safe as houses ... but they no longer look like mobile dwellings.

The all-new Volvo S40 and V40 are here to change the way you think about Volvo, and Sweden's finest is determined to shake off its drab, boxy image, now seen as an obstacle to sales.

Essentially the Volvo S40 and V40 replace the square, slowing 440s which withered from the market last year.

Admitting that "good styling costs no more than bad styling", the S40 and V40 look more like a modern vehicle than a full scale cheap die-cast model.

They are also still classically Volvo maintaining the trademark grille and lines.

Mechanically identical, the S40 and V40 only differ at the rear, with S denoting sedan and V wagon. The new '40 series' Volvos are shorter and generally smaller than the now upgraded and rebadged 850 (S70 and V70 - see page 26).

A change of image is imperative, but Volvo also says retaining its core values - safety, quality and environmental friendliness - is important. Coinciding with Volvo's image change are new stand-alone dealerships which should be complete in two years.

Interior space in the S40 and V40 is not abundant and a load of large adults will find the going cramped, particularly rear legroom. However, the kids will never know and young families are where the S40 and V40 are aimed.

Lack of size is made up for with features. Standard equipment includes central locking, power windows, airing, rear seat armrest, electric mirrors, electric windows and interior lights for almost every corner of the car.

Getting comfortable is also easy with height adjustable front seats and steering column and an armrest for rear passengers.

The luggage compartment will not match locally-built family cars for size but is substantial for the vehicle.

The S40 and V40 feature a small cargo net to prevent loose objects from rolling around and larger objects can be fastened with a retractable 'seatbelt' in the boot. Both have split fold rear seats with a centre lap-sash belt while the wagon also gets a cargo blind.

Building on its solid reputation, safety was high on Volvo's agenda for the V40 and S40. Both are equipped with dual front and side airbags - the first compact luxury car to feature such.

Combined with anti-lock brakes, front seat belt pre-tensioners and Volvo's side impact protection system (SIPS), the V40 and S40 are class leaders in safety. Young children are catered for with built-in 'baby' seats that match toddlers to the adult seatbelt.

S40 and v40 also have Volvo's dynamic stability assistance designed to prevent wheels pin. It utilises the ABS sensors on each wheel and reduces the flow of fuel to reduce power and torque until traction is restored.

Both models are powered' by Volvo's four-cylinder 2.0-litre 16-valve all-alloy engine with 103kW of power and 183Nm of torque.

A five-speed manual transmission is standard or for $2000 there's an optional four-speed automatic with sport, economy and winter driving modes.

Fifteen-inch steel wheels are standard and for $4000 extra the 'SE' pack has alloy wheels, leather trim, sports steering wheel, climate control air-conditioning, woodgrain and a CD/cassette deck. As well as clear sound, the stereo is well laid out with large buttons and dials.

Volvo claims the environment was a major concern with the production of S40 and V40. As well as being made partly from recycled materials, more than 90 per cent of the S40 and V40 is recyclable. Pricing starts at $42,950 for the S40 manual while the wagon commands a $1000 premium. Both are covered by Volvo's two-year, unlimited kilometre warranty.

The 40 series Volvos are not performance cars although the 2.0-litre engine is a strong contender in its class. Peak torque is produced up at 4500rpm. Rev it hard and the Volvo will stick its head out, slightly.

While the auto is smooth, it sometimes hunts between gears and soaks up performance offered by the manual.

Handling was good with a typical front-wheel drive tendency to slide at the front wheels when pushed.

There's also some feedback through the steering wheel.

Suspension is not exactly boulevard and is jarry and firm over larger bumps.

We only tested the 'comfort' suspension and are hard pressed to see value in the optional $490 sports suspension package. 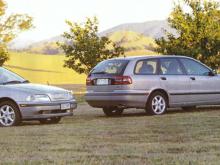