Well, the rains came, and the rains went, so now we can tell you how the Volvo S40 works when the precipitation stops. And it works pretty well, though there's room for improvement.

The dark blue car we drove in the April issue of Wheels had a European suspension package that won't appear here in Oz until a higher power (S40R?) version of the baby Volvo shows up on these shores. However, the green S40 here is a dinky-di Aussie-spec model which, with the SE trim package, retails for $47,950.

First thing you notice is that the tyres can be a bit loquacious when cornering. They don't grip too badly, but the overall effect isn't especially sporting - a bit sloppy, in fact.

General cornering attitude is one of mild understeer and no fiddling seems to have an effect upon the car's path through a corner. If you know the road and are able to set up in advance, it can be hustled around your favourite section of twisty bitumen reasonably quickly, but otherwise it's flat and a bit uninspiring.

The steering is still about the best we've encountered on a Volvo, and may be the chassis' highlight. Brake feel in the dry is good, with an easy to modulate pedal.

Though the low aspect ratio of the tyres transmits some harshness to the cabin (most noticeably in the high-frequency stuff), the ride is pretty good overall - nobody's going to feel unduly bounced around.

Like the old Volvo 440, the S40 has difficulty getting power down on the road, though to a much lesser degree than the last Dutch Volvo did. Dropping the clutch and calling on some hard acceleration causes a little scrabbling around, but the wheel hop the 440 displayed in such circumstances is absent and not at all missed. About the only other thing we noticed that was different from the blue S40 we drove during The Flood is that, with the tan interior, the rhino scrotum dash-top graining looks more pronounced than it does in grey.

Wet or dry, the S40 remains a strong competitor against Audi's A4 and the Peugeot 406, and can even serve as a valid 318i alternative, if you're not lusting after BMW dynamics. BH

• Against: Dynamics not as good as they could be, tyres only average 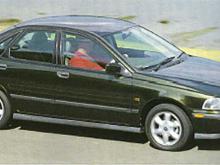 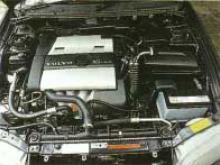