When word first got out Volvo was planning to produce a hot new version of the S40/V40 I, for one, was sceptical. Solid and practical the new Swedish twins may be, but they are hardly the perfect base on which to turn out a narrowly focused performance car. In Europe early examples of the Dutch-built executive class contender have been roundly criticised for their lack of chassis refinement and crude levels of refinement by class standards. Such has been the backlash that in the 12 months since their launch the S40/V40 received more than 1200 separate chassis upgrades in a bid to boost their appeal.

Volvo claims it's all part of an on-going development program. But when engineers go to the trouble to tell you about it all, you know something's not quite right. Which is exactly what they did before laying on the new T4, hoping the injection of horsepower and myriad of chassis changes would bring us away smiling and full of renewed enthusiasm for the S40/V40.

You need to look hard to spot this new Volvo. Visual changes are limited to new alloy wheels, a subtle rear wing, chromed exhaust, new headlights featuring clear lenses and a tiny T4 badgeplate below the right-hand tailight. Power for the go-getting Swede comes via a new twin-cam powerplant, dubbed B4194T, produced by lopping a cylinder off the Porsche-developed five cylinder found in the superb T5. The two four-valve engines share the same 81 mm bore and 90 mm stroke measurements as well as a good deal of external hardware. Output is boosted by a intercooled turbocharger cranked up to deliver a solid 1.9 bar of boost pressure. The increased induction combines with a 8.5:1 compression ratio and re-mapped ECU to give the new engine 147 kW at 5500 rpm and a solid 300 Nm of torque across a flat band of revs from 2400 rpm though 3600 rpm. Big figures in anyone's language, and unthinkable from a car maker like Volvo just five short years ago.

Compare these figures with the T5 which, when introduced in 1993, developed 130 Nm/litre against the T4's impressive 162 Nm/litre. Problem is, the T4 requires 98 RON unleaded to ensure its engine keeps churning that torque out with any regularity, something that could prove a headache for Volvo when the new car heads to Australia later this year.

Another problem is getting it all down cleanly, which is why Volvo has given its newcomer a new DSA switchable traction control system as part of a long list of standard equipment. Unlike the TRACS system in the T5 which uses the brakes to ensure everything is under control, the T4 controls wheelspin by cutting the fuel supply momentarily. Leave it engaged and it copes well, the engine management system reducing the amount of fuel available by precisely monitoring the amount that will enable the wheel to return to the correct rotational speed. Turn it off and the front wheels scream for traction during standing starts and when powering out of tight first gear corners.

On the run, the T4's engine proves a little lethargic down low, and there's a noticeable amount of turbo lag when you jump on the gas. But keep it pepped up and it proves exceptionally rapid with an eager mid-range punch and solid top end. Volvo claims 0-100 km/h in 7.3 sec and a 235 km/h top speed.

However, these figures fail to convey its strapping in-gear acceleration. To handle the extra performance, Volvo has fitted the T4 with a revised five-speed transmission from the S70/V70 AWD. More precise and with shorter throws than that used on naturally-aspirated versions of the S40/V40, it comes mated to a short 4.25:1 final drive. When it goes on sale in Australia the T4 will also be available with a new four-speed automatic.

Developing the T4 gave the Volvo a chance to rectify many of the criticisms of the S40/V40 chassis. The list of changes runs deep, most of it to do with the addition of sound proofing and isolating rear suspension noise. Along with the T4 the changes have also filtered down to other S40/V40 models.

Volvo has also come up with a whole new suspension set-up for the T4. Tuned 10 percent stiffer than existing S40/V40 models, it provides a cosseting, if not altogether controlled, ride with improved stability and responsiveness.

The ride height and 19 mm front anti-roll bar remain the same, but the rear anti-roll bar is 2 mm thicker. Other detailed changes include a five-degree increase in castor on the front MacPherson struts and a slight re-alignment of the rear multi-link system's pick-up points. Added to this are a set of grippy 205/50 ZR16 Pirelli P6000s shod on good looking alloys.

Yet despite the promise of its gutsy engine, the T4 fails to impress in quite the same way the larger T5 does when pushed hard. In a straight line it is a real eye opener with a blistering turn of acceleration and impressive levels of high speed stability. But its chassis places big limitations on just what it can achieve once you head off the highway and into the countryside over winding back roads.

Look out for them in Oz late this year priced from around $55,000 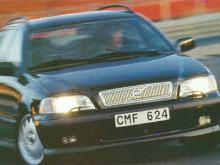 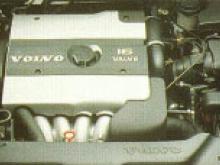 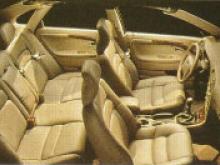 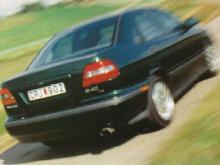