Turbocharged and packing 200bhp, the S40 T4 is still a Volvo the stiffest clergyman could love.

We're doing about 95mph. We've just overtaken an old Saab 900, and we're closing on a battered, pale-blue, two-door Volvo 240. We're skimming pine trees to the left, the shining flat stillness of a Swedish lake to our right. Welcome to the air-conditioned world of the 200bhp Volvo S40 T4. It's a pleasant place to be, regardless of the scenery. Chilled air gusts from the vents. Our chairs are leather-edged, enveloping enough for comfort, generous enough not to pinch, and their position can be trimmed, infinitesimally, by electric motors. The cabin is quiet, penetrated only by the faint gush of air washing over it, and the engine's low drone.

We're covering ground at a terrific rate, surging on a turbocharged wave of torque that allows the Volvo to breeze past slower traffic with amazingly little effort. We are, if you like, travelling club class.

It is not, however, a greatly entertaining experience, although it does feel reassuringly secure. This security of mind is induced not merely by the profusion of inflatable cushions secreted about the Volvo's interior, nor by its high standing in the recent Euro NCAP crash tests, but by its sturdy purchase on the road and the calming potency of its brakes.

But you cannot relax completely. Lumpy, bumpy rolling roads have its nose hunting like a foraging dog's, the ugly, square-centred wheel constantly needing correctional attention. And there's another irritation, which surfaces every time you need to accelerate through the gears (that would be quite often, then), particularly the lowest ratios: it's the engine's noise. A turbo'd four-cylinder can never be as smooth as a six, but it can certainly be smoother than a Volvo T4's - though it's quiet overall, this engine sounds coarse when revved, and occasionally sends a vibratory tingle through the accelerator pedal. There's no aural pleasure to be had from working it hard, leading you to conclude that the T4 would be much better off with six cylinders, or more realistically, Volvo's own five-cylinder version of the same engine, which is quite a tuneful, pleasing thing. But Olle Englund, the T4's project leader, explains that although that engine will indeed fit, there are logistical reasons preventing Volvo from installing it.

Initially the four doesn't feel as potent as the figures suggest, either. Not only can it dispense 200bhp, but it also serves up a spectacular 221lb ft wallop of torque at a diesel-like 2400rpm. But only if you hammer the accelerator. That may sound stupid, but it took many miles to realise that to get real go out of this car, you have to use wide throttle openings - just brushing the pedal turns the Volvo T4 into something quite sedate.

It's at its best above 60mph on fast roads, when you can stroke it along using fourth and fifth gears to keep up terrific momentum. You don't need to rev it hard, and it handles with pleasing fluency. But you can't quite call it a sports saloon. Like so many cars of this type - the six-cylinder Audi A4, Vauxhall Vectra and even, dare I say it, the BMW 323i - there's a certain deadness in its responses. You simply don't get enough feel through seat or wheel. What's more, the Volvo can't really be steered on the throttle, because its chassis is too inert. In one sense that's good 0this is a very quick car, and lifting the accelerator mid-bend to avoid an ambling elk could well see you scything messily through said creature's habitat. But there are no dramas here, the Volvo's tail remaining firmly planted regardless of what you do. Equally though, there's no option for trimming the car's line with your toe. It just goes round stoically.

The process isn't always quite as seamless as that sounds, though, because you do have a fair bit of steering on your hands if the road isn't as smooth as a freshly pressed tie. The big 205 tyres like following camber changes - most noticeably when cresting the crown of the road during overtaking - which can add an extra and undesirable frisson to the manoeuvre. The steering is also a bit vague around the straight-ahead, although this will be banished, says Englund, on production cars, the T4 getting a quicker-acting rack than the standard cars.

There has been a substantial catalogue of chassis changes that apply not only to the T4 but to the rest of the S40/V40 range, too. That's partly because the car wasn't up to par when it was launched, but also because it makes building it easier. The 40, if you remember, is built in Holland in tandem with the Mitsubishi Carisma, whose core genes it shares, and it is logistically complex to vary components between models.

The updates include revised springs and shockers for the two set-ups ('comfort' and 'dynamic') offered on the standard range. The T4 has the dynamic setting as standard, but there's also an optional 'sport' package that lowers it 20mm. At the rear, the trailing arm bushes have been redesigned to reduce camber change when the rear wheels toe in during cornering, to improve grip, while new upper and lower links and a lower arm bush cut road noise. At the front there are new bushes to lower road noise too, while revised geometry increases the castor angle to improve stability and steering feel, though as we have seen, it is not entirely successful. Given the relative crudity of the 40's MacPherson strut front suspension compared with the hardware you'll find under the arches of a 3-series, A4 or a Nissan Primera, perhaps this isn't so surprising. But giving the T4 extra locating links up front isn't feasible for production reasons, explains Englund. The traction-control system, therefore, is all the more necessary - you'll find out exactly how much you need it if you switch it off and accelerate hard in low gear. It's hooked into an ABS system that also balances the brake forces between the axles.

The brakes themselves have had a workover too, all 40s getting bigger front discs, stiffened brake callipers and hoses, a bigger master cylinder and an increased booster ratio, reducing pedal travel. Braking distances fall, and they're said to be more fade-proof. Certainly at the Mantorp Park race track where Volvo let us loose in some sport-suspensioned T4s, it was pretty difficult to induce fade. They've got good feel and progression too.

In fact, the whole car performed well at this smooth track, preserving its front tyres despite scope for major understeer at the hairpins. On the fast sweepers it hung on ably, proving stable and easy to steer precisely, if a little numb. But on the open road the T4 is not really the driver's carthat Volvo claims. It's fast, practical, convenient and comfortable (though that sport suspension will probably be pretty thumpy on Britain's patchwork urban roads), but it's nowhere near giving you the drive of your life. That could be one reason why the T4 is only subtly marked out as a performance car, with a rear spoiler, an oval exhaust pipe, unique alloys and clear lensed headlamps, the light beam being shaped entirely by the reflectors. It could, also be the reason for the T4's keen pricing which, at £20,125 on-the-road for the standard S40 T4, will be enough to get many people thinking. But those in search of a really exhilarating fast saloon should look at the Subaru Impreza Turbo, or the Peugeot 406 V6. ***
RICHARD BREMNER 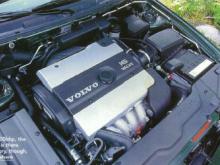 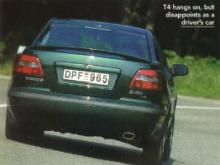