Look at what those fun junkies at Volvo are up to now.

They've just slipped a turbocharged engine into the S40 saloon and V40 estate to produce a couple of models badged T4, pitting 200bhp and 223lb ft of torque at the disposal of anyone with just over 20,000 Pounds to spare.

An Audi A4 1.8 Turbo has only three-quarters of that: in fact, to come anywhere near the Volvo's level of power and performance you need a big-capacity six-cylinder engine (BMW 328, Peugeot 406 3.0) and even then it's doubtful whether they'll match its mid-range pull.

The T4s are better than previous fast front-drive Volvos at applying power, too. A new form of traction control works right across the speed range, not just to get you on the move, while the chassis finds life less taxing than that of its more powerful big brother, the T5. Electronic aids to even out the braking effort, linked to a non-skid system, make it stop more smoothly, too.

The S/V40 chassis has in any case been revised in an attempt to cure the original cars' ride and handling imperfections. The T versions, with their stiffer springs, dampers and roll bars, show that Volvo is at least progressing. Steering feedback and body control are much improved to go along with the improved traction, though the ride still borders on harsh whenever the car encounters surface changes.

Find a smooth road, though, and the newcomers now feel rather good, while Volvo also seems to have subdued much of the noise and vibration apparent in early S/V40s.

It wouldn't be our first-choice compact sports saloon, but its blend of performance-per-pound and safety - a reputation, enhanced by the latest Euro NCAP crash tests which put the small Volvo top of its class - will ensure that the Swedes continue to find something to smile about. 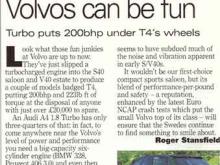