Fifth gear, 2000rpm uphill and still pulling like a dentist. This is Volvo's V40 T4, meaning wagon with turbo charged four cylinder engine. The turbo, quickly building to maximum 1.9 bar (28psi) boost, is blowing a cool breeze up the four banger's backside. At these lower revs, torque fattens exponentially, then once the engine hits its wide sweet spot from 2400-3600rpm, the torque curve flattens, as will the hill.

Think of the V40 T4 as a condensed four-cylinder version of the V70 T5. Compared directly with the Jane V40, the T4 is a driver's car from point to point, from apex to apex and from ear to ear. Volvo suspends the T4 on a firmer suspension and as a consequence has positively transformed and toned the character of the entire car.

All T4s imported to Australia are updated with Volvo's running improvements: more sound deadening, better brakes, revised front and rear suspensions. This V40 T4, built 11/97, is markedly better than early V40s we've driven. Fewer vibrations dance through the bodyshell, although the pedals still vibrate. The engine idles and revs so much smoother than the air-sucking 2.0 litre in the S40/V40. Unexpectedly not all the bad habits have been corrected: exhaust boom is still annoying at cruising speeds even with the quietening turbo.

The T4 shares a stiff on centre steering feel with the V70R, an effect of Volvo aligning more castor into the front wheel geometry. The T4 responds with stable straight ahead tracking and handling a notch above the standard V40, responding quicker on 16in alloy wheels and action-oriented 50 series rubber. Ride comfort is very good, better than the base V40.

The T4 is outwardly sublime, careful not to overstate its abilities, yet it offers extremely good passenger comfort for a smallish wagon. Because the V40 is built on the S40 floorpan with the sedan suspension, load space gets squeezed through the middle. Bear in mind the V40 is smaller than the Magna wagon and a bit bigger than the Lancer wagon.

Against: Clunky shift. Are those alloy wheels or wheel covers? Automatic available in six months 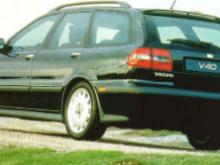