Excerpt from Wheels (Australia) magazine's annual car of the year feature in February 1998.

Volvo's collaborative effort with Mitsubishi (whose Carisma shares this platform) should get the best of both worlds: Swedish safety and Japanese sophistication. Front-drive S40 (sedan) and V40 (wagon) are powered by a 2.0 litre, 103kW four-cylinder engine and each version boasts substantial standard equipment. But the Volvo has to work hard to peg back the proven German champions (3 Series, C-class, A4) in this segment. At least it's helped us forget the 440.

The compact 40 is a good size, a good price and a good looker. It gives mostly good first (driving) impressions, except that the engine is immensely course and noisy at high revs. However, the final verdict is tempered by the knowledge the still-fresh car has already undergone extensive re-engineering, with some 600 changes made to improve quality and driveability. We have to wonder how Volvo let a car this underdone out as the factory in the first place.

The sedan and wagon versions of Volvo's smallest are both nicely styled cars, the first all-new designs from Peter Horbury's team. Horbury cleverly kept a few Volvo cues, but proved that thy needn't be boxes. The interior is up to the same high standard, though the soft-touch materials used in heavy contact areas will deteriorate quickly.

A disastrously premature launch means early S/V40 customers did much of the development work for Volvo, putting up with poorly controlled ride, harsh engine, soft brakes and limited adhesion. When you compete in the rarified compact luxury class this isn't good enough. A shame, for the safety is class-leading and the styling, inside and out, tasteful.

The Volvo 40 series has performed outstandingly well in European consumer crash testing, with better results (in a single test crash only) than any other car in its class. Its side airbags were the first in a car of its size. Pre-tensioners assist the work of all five seatbelts in the car, another unusual and excellent feature. Ask for the in-built booster seats for kids.

Each Volvo is designed on an Environmental Priority System to assess the impact from manufacturing through to disposal. The outcome: more than 90 percent of an S/V40 is recyclable. Volvo uses recycled plastics and recycled wood fibres in the S/V40. Volvo has banned using CFC and chlorinated solvents, and has been using water-based paint for 10 years. Test auto's fuel economy was 9.5-9.8 M/100km.

Surprisingly well equipped for just over 40 grand, it is only just pipped in the Euro-sedan value stakes by the Peugeot 406. Anti-lock brakes and multi airbags are standard, of course, while up-spec SE add-ons include cruise, CD and trip computer. Volvo's quality problems will affect the resale value of these early S/V40s. 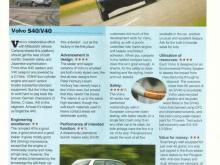