An excerpt from Motor (Australia) magazine's annual "Bang for your bucks" feature about the Volvo S40 T4 from June 1998.

Volvo has done a great job of shaking off the 'hat driver' image in the past couple of years. Improved styling, a better advertising campaign, top-level participation in Super Touring racing and endorsement from drivers like Peter Brock and Jim Richards have all helped to give the company a long overdue 'new look'.

But if the company can't back that up with decent performance cars then all that work might just go down the gurgler again.

To be blunt, this Volvo S40 Turbo just doesn't do the job. It's not that the basics aren't there; it's more a case, perhaps, of trying too hard. Too much turbo boost and too-stiff suspension for a start. And there's too much understeer.

Placing last overall in this elite company normally wouldn't be the end of the world. Usually, even the last car on the list brings at least a little smile to the lips of our test drivers. But it is difficult to think of a situation in which this Volvo could turn our test troupe into the beam team.

Cameron's Comer: It's got good straight line speed and good coming out of slow corners. But the brakes were bad, very graunchy. And it lights up the front wheels a little too easily. 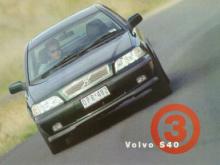