You can't excuse Volvo of not trying. It's taken a year and numerous changes, but the latest S40 may be the best yet

Nothing succeeds like excess. It's a common enough theme in life. Just ask any of the boys sitting on a hill near Bathurst in October if there's such a thing as too much beer. Or ask the producer of Bay Watch if any of his female stars could have too much ... umm ... frontal enhancement.

It works for cars, too, because the most excessive cars in all departments, such as the McLaren F1, are often the best. But sometimes it doesn't. And, as an example, take the Volvo S/V40 T4.

Here was a car with too much horsepower, delivered too suddenly and through wheels connected to suspension that was too stiff. About the only area in which its designers could have gone overboard but didn't was in the driveline, because the T4's torque steer and traction problems revealed too few driven wheels. By a factor of two.

Why dwell on the T4's problems? Because Volvo has launched another turbocharged version of its S40 sedan and V40 wagon mid-sized siblings. This time around Volvo's boffins have fitted them with a larger capacity engine with lower turbo boost and suspension a whole lot less compromised than the high performance T4.

And they've managed to come up with a good thing. It's called the 2.0 T, which fits halfway between naturally aspirated versions and the high-performance T4 in terms of both price and engine power output. Like the T4 the 2.0 T is turbocharged, but employs lower turbo boost pressures and twin-scroll turbocharger technology to provide increased torque at lower engine speeds instead of a means towards all-out performance.

The S/V40 T'S 2.0-litre engine uses what Volvo says is the first application of twin-scroll turbocharger technology in a petrol-engined production car. It works by splitting the exhaust manifold into two streams, fed by cylinders one and four, and two and three. They meet at the turbocharger's impeller blade as tuned pulses to effectively spool the turbine up more quickly, this minimising lag and combining with the low boost pressures to give an even spread of torque.

This means there's just a gentle power increase of 14 percent over the naturally aspirated 2.0-litre engine. The S/V40 T outputs 118 kW at 5100 rpm, but more serious gains have been made to torque. Maximum pulling power is now 230 Nm compared with 183 Nm. But, more importantly, it is produced from 1800 to 4800 rpm, producing a torque curve as flat and square as the roofline of previous Volvo models.

The light pressure turbo engine also employs Volvo's new EMS 2000 engine management system which has 50 percent more computing power than its predecessor. One of its features is accurate measurement of engine temperature, allowing more efficient combustion and the ability to limit boost if engine temperatures become too high.

It can also vary turbo boost (which is set normally at 0.6 bar compared with the T4's 0.9 bar) to compensate for changes in altitude and ambient temperature – which affect the density of the incoming air to the engine – ensuring optimum power and torque outputs in all conditions.

The Volvo PR people claim the S/V40 R's increased performance and more flexible engine will make it an alternative to those looking at BMW's 3 series.

Volvo is claiming 0-100 km/h performance in the range of 8.5 sec for the five-speed manual and 9.0 sec for the automatic. Premium unleaded is recommended, but a knock sensor allows the use of standard ULP without risk of engine damage. Naturally, standard ULP drops the performance levels.

In line with the turbocharged car's softly-softly approach, suspension rates have been set at the same 'comfort' level as naturally aspirated models. By comparison, the performance-minded T4 has what Volvo calls 'dynamic' settings; we prefer to call them harsh. Volvo Car Australia marketing director Russell Turnham says the company is looking at making the softer 'comfort' suspension settings available on the T4, which is a relief and something we're looking forward to driving.

Its introduction adds another model to Volvo's small/medium car range and more than a little confusion for prospective customers now faced with the choice of 12 variants, taking into account body styles, engines and transmissions.

It's not what you'd call a gun performer and, in much the same mould as the Audi A4 Turbo, neither is it meant to be. Engine power doesn't come on like a fluorescent light, but builds steadily like a warming arc lamp to give solid – but handle sensational – acceleration. Funnily enough, the four-speed automatic version is in some ways nicer than the manual because the slusher goes even further towards minimising the engine's on/off boost characteristics.

On dry road surfaces there's not enough wick to light up the front tyres, which is a relief, although they will start to squirm in the wet. The ride is comfortable up to a point, although the MacPherson strut front end seems limited in its travel and will start to jar slightly over rough ground.

The general lack of balance front to rear becomes more pronounced in cornering. This is a front-driver understeerer, no two ways about it, and hooking into tight stuff needs to be done with a gentle touch and a judicial, late introduction of throttle to find traction and an easy exit.

But again, it's not accompanied by scrambling wheelspin as the turbo blows in as it does in the T4. Nethertheless, the chassis balance just isn't there so while the S/V40 T can be driven quickly it doesn't seem to work in tandem with the driver's intentions as well as it could.

It has taken a year or so and any number of variants to get it right. But with the V and S40 2.0 T it looks as if Volvo has managed to get the best balance it looks like getting from its mid-sizer. It certainly looks as attractive as ever and the V40 version offers useful extra carrying capacity over the sedan and most of its European mid-sized rivals of similar price.

To the wise sage who said things are best taken in moderation, we salute you. And anyone interested in this particular flavour of Volvo should so the same. 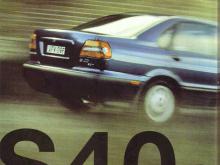 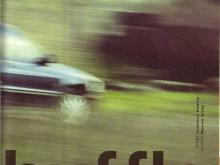 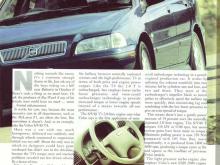 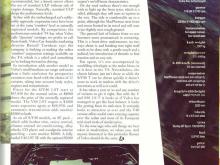