Excerpt from a comparison test between the Subaru Legacy, Audi A4 and Volvo V40.

One of the best-looking estates around, Volvo's V40 has given the company a genuine contender in the compact executive-class estate market. Not only is it a very pretty car, it's also better made and better packaged than its predecessor.

Launched in May '96, the V40 has acquitted itself well in safety terms, leading the field in recent Euro crash-tests and proving that Volvo haven't abandoned its traditional value sin favour of more racy looks. It comes with a choice of two different 1.8 engines, a 1.9 turbodiesel, and two 2-litre units, one normally aspirated and one turbocharged. On top of SE and CD trim levels are additional 'Volvo Life' packages, offering predetermined lists of extras, grouped together at advantageous prices. There's also a T4 two-litre turbo, increasing power from 160 to 200 bhp, which offers traction control, adjustable suspension, ABS, and alloy wheels.

Early V40's were criticised for indifferent build quality and an over-firm ride, but we've found little evidence of this. The V40 really is a pleasant surprise for buyers used to plain, solid, but frankly dull Volvos of old. Class-leading safety has already been mentioned as one of the car's attributes, but there are many more. The Swedes have done their homework, and designed a state-of-the-art facia which not only looks as good as the best on offer, it's very driver friendly, too. The interior feels upmarket for Volvo, and with leather seats, the sophisticated effect is complete.

Driving the V40 is also a pleasant surprise, with some lively engines in the range. The direct-injection turbocharged diesel is a smooth unit and the T4 Turbo is a real Q-car. Ride is a touch on the firm side, and handling feels a tag woolly compared to the surefooted Audi and Subaru, but powerful brakes contain the car's performance with ease.

This is very much a 'lifestyle; estate, rather than an all-out load carrier. With just 28 cubic feet of load area, it's the smallest of the group.

Now the V40 is becoming trendy, prices of later cars are firming-up, so the real bargains are to be had in the earlier models. A 96N 1.8 with a bit of leg could be yours for 8K pounds.

Since the V40 came out in '96, we've had too many people chasing too few cars. Even our demos are saleable. We're hoping the letter change in September will generate some more used stock. Out of 40 used cars, we never have more than two or three V40s. Late 20-30 year-olds are buying it on street cred alone and residuals are strong, so people can run one and still get a good return for it. Because every car is tailor-made, there's no standard spec, so you have to be careful in pricing. There are no real faults - all cars had a three-year/60,000-mile warranty. If you buy one less than four years old/60,000 miles from a dealer, you'll get a two-year warranty.

• No two cars are the same - buy with the best spec possible for highest re-sale value.
• Check price guide to ensure you're not being ripped off.
• Full Volvo service history gives confidence, aids resale.
• Low-spec standard cars will shed value more quickly.
• Avoid white and dark blue - all other colours popular.
• Parts/servicing can be expensive - consider independents.
• Ride on early cars was firm - drive first, before you buy.
• Soft compound original-fit tyres give a quiet ride, but may last less than 15,000 miles - tread depths under 3mm mean tyres are nearly finished.
• Pre-'98 cars with air-conditioning are rare but more desirable.
• Beige interior is least saleable colour.

The Volvo V40 represents a pleasantly fresh approach to estates from Volvo. It's really more like an overgrown hatch than a true estate, but it's a very likeable-looking and well-built vehicle. There were some early problems, but these seem to have largely been ironed out and used models are becoming very good value. 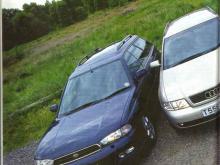 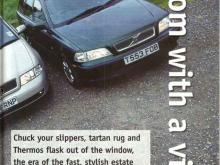 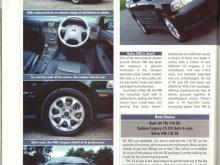 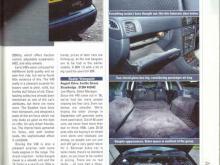 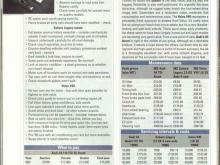