The four models in sedan and wagon are distinguished as before by engine options and all are available in manual or auto form. Prices remain largely unchanged and range from $39,950 for the 1.8 litre manual sedan to $57,450 for the top spec auto wagon.

Volvo has again addressed the often criticised handling by redesigning the front strut suspension to increase track by 18mm and wheelbase by 12mm. The spring and damper rates have been revised and higher aspect tyres are used on all but the performance T4s. The mid-spec 2.0 and T are fitted with 'Comfort' suspension, while the T4 has the firmer 'Dynamic' version.

We drove a manual V40 T SE wagon and an auto S40 T SE sedan, both fitted with the aptly named Comfort suspension. This package delivers cushiness ahead of sharp handling and is too soft with excessive float and vagueness over long undulations. Okay, short, sharp bumps are dismissed easily, but excessive tyre noise is also a problem.

The 2.0T light-pressure turbo and the high performance T4 turbo have been revised significantly, the 2.0T now producing 121kW (up from 118kW) and 240Nm (up from 230Nm). The T4's peak power and torque figures are unchanged, but peak torque now arrives at a very useful 2500rpm.

The low-pressure 2.0T is responsive from just about any engine speed. It mates best with the manual but even with the sometimes indecisive new five-speed auto it works well. Pity the chassis revamp didn't manage to fully eliminate the torque steer, though. Both the T and the T4 have traction control as standard, while all models have electronic brake distribution.

The S40/V40 range now has dual-stage front airbags and the inflatable curtain first introduced on the S80 sedan and V70 wagon. Other changes include a new S80-style dash and optional Xenon headlights.

Whether these changes will be enough to successfully carry the S40/V40 while its replacement is developed remains to be seen. 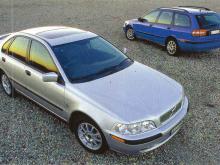