It's no easy task improving on a car universally acclaimed for its outstanding on-road dynamics, timeless design and superb packaging. But that's exactly what BMW has done with the new 318is.

Entering the market this month at $51,750 in manual form only, the second-generation 318is follows closely in the tracks of the popular E36 3-series sedan. And despite sharing the same superbly balanced rear-drive platform and identical styling cues, it carries a number of important innovations which go some way to justifying the considerable $10,339 premium it commands over the lesser-able but equally elegant 318i.

BMW claims it spent upwards of $100 million developing its new coupe, and though at first glance that may not be apparent, close scrutiny reveals that this latest BMW differs from its four-door cousin in almost every exterior panel. Only the bumpers, grille and headlights are carried over unchanged.

Included in the car's aesthetic changes is a rearward shift of the A-pillar - increasing the length of the bonnet by 80 mm - a 30 mm lowering of the roof and an increase in rake of both the windscreen and rear window.

Given the scope and cost of the changes, the question that springs to mind is, why didn't BMW create something a little more radical? The answer to that may very well lie in BMW's recent announcement that it will build a manufacturing plant in South Carolina, US, to open in 1995. As reported in last month's Newsline section, it appears the Bavarian carmaker is already developing a retro-styled two-seat roadster using the 318is mechanicals, for introduction in world markets. Now, they don't come much more radical than that, do they?

For the time being, BMW is content with its coupe, saying it is styled to suit the tastes of "business users" - a group it recognises as likely to dominate sales. We agree it does offer tremendous practicality - with a decent sized boot and seating for four in relative comfort, but whether potential buyers will be prepared, as BMW says they are, to cough up a substantial sum of money for two fewer doors remains to be seen. Having lived with the car for a week I fully expect they will. What's $10,000 when you're having fun, anyway?

Of greater significance than mere styling alone is the return of BMWs wonderfully smooth and refined M42 powerplant. This engine is the same twin-cam, 16-valve 1.8-litre four-cylinder unit used to good effect in older 318is. This time around it gets a variable length induction system and a more advanced engine management system improving low-end response. Power is rated at 103 kW at 6000 rpm while torque runs to 175 Nm at 4500 rpm.

BMW's official acceleration figures display conclusively that weight is a critical factor in any car. For despite the 318is' improved engine performance its 1240 kg kerb weight makes it slower to 100 km/h than its predecessor - 10.2 secs versus 9.9 secs. Nevertheless, it is more economical, with combined city/highway fuel consumption of 8.3 LlI00 km.

BMWs four-potter is free revving with a linear supply of power into the upper reaches of its rev range but lacks mid-range torque. This leads us to the conclusion that BMWs substantially more powerful 24-valve, 2.5-litre straight-six powerplant, as found in the 325i coupe, makes for a consummately better car in terms of driver appeal, but at $76,650 it is well out of the ball-park for aspiring 318is owners.

But there's no doubting the 318is' superb roadholding. At speeds where other similar priced luxury offerings would have already pulled up stumps and retired to the sidelines, the BMWs Michelins continue to display prodigious grip, endowing the sleek coupe with an almost neutral cornering stance. Pushed hard on high speed corners it displays mild understeer followed by a hint of trailing throttle oversteer but it is easily controlled and never becomes a factor in more relaxed driving. As equally impressive is its ride quality, supple but with an inherent firmness that inspires enthusiastic backroad driving.

The secret to the 318is' endearing on-road qualities is a combination of its near equal weight distribution and Z-beam rear axle - a system first employed on BMWs revolutionary Z1 roadster. Australian specification coupes also benefit from BMWs firmer M-technic suspension incorporating stiffer spring and damper rates. A softer European specification suspension is offered as a no-cost option.

Inside, the 318is retains the same ergonomically pleasing dashboard and interior trimmings as the sedan, the only upgrades being a 260 km/h speedo along with an improved sound system. You sit low and with the roof now closer to the top of your head, it imparts a distinctly sporty ambience.

An interesting feature is the electronically operated front windows which automatically slide down about 10 mm when the door is opened and then slide up when the door is shut. Hardly noticeable at first, this process is claimed to vastly improve the coupe sealing - remember, this car has no door frames - while reducing wind noise at speed and increasing torsional rigidity.

One of BMWs obvious design priorities is ease of entry into the rear quarters. The doors open wide and the front seats slide forward and tilt in one movement leaving a wide corridor. The contoured rear seat is a big improvement on the previous coupe's rather uncomfortable bench, and features unique BMW seat belts, which anchor in the middle of the car, as well as a handy 50/50 split fold mechanism that greatly extends the car's load carrying capacity. Rear seat accommodation is more than acceptable given the traditionally selfish nature of coupes. There's adequate legroom thanks to the clever design of the front seat backs but taller passengers will find the coupe's steeply raked rear window robs headroom considerably.

There's no doubting the BMW 318is' appeal. In the tradition of BMWs finest touring cars, the elegantly styled coupe is a tremendously effective driving machine with a dynamic ability that goes one better than its four-door sedan sibling. It does, however, suffer a few imbalances that potential buyers should carefully consider before committing their hard earned cash. The most obvious of these is its high sticker price, the legacy of the car broaching the Federal Government's $45,690 luxury tax threshold, earning a 30 per cent impost. Indeed, with all the options our test car carried (sports seats, leather bound steering wheel, electrically-operated sun roof and rear-seat headrests) it's list price jumped to $57,400.

For that kind of money you can pick up a 320i sedan with increased power and torque along with the practicality of four-doors. The decision's yours! 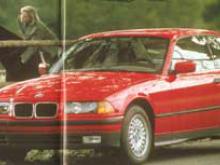