Every now and then a car comes along that represents more than the sum of its parts. The 1996 BMW 318is is one of them.

There is nothing particularly clever about it. No five-valve-per-cylinder trickery, no adaptive suspension, no aluminium bodywork, just a 16-valve four-cylinder engine in a familiar two-door shape.

There are changes, of course. Not least of which is the new 1.9-litre engine from the Z3 roadster. Increasing the stroke by 2.5mm and the bore by 1mm has increased maximum torque by 4lb ft (to 132lb ft) and reduced the speed at which it is delivered from 4500 to 4300rpm.

The result is an engine that feels more alive for more of the time. Throttle response is considerably quicker and the power band is wider and easier to access. BMW claims the new 318is coupe will reach 62 mph from rest in 10.2sec and crack 132mph flat out. It is also claiming a six per cent reduction in fuel consumption.

But perhaps the biggest change is the way the engine sounds. Unlike the previous coupe or indeed the current Z3, the latest 318is has a deliciously hollow rasp when extended. It isn't quite as characterful as an Alfa's 2.0-liter Twin Spark, but we're talking fractions.

But the new engine is just one part of the equation. It is neither more nor less exceptional than the rest of the car. Unlike the Alfa GTV, it has a ride quality every bit as good as its engine. Just soft enough to cosset, just firm enough to reassure. The ideal accompaniment to its secure rear-wheel-drive handling with buckets of grip, a mostly neutral stance and beautifully accurate steering.

Don't forget the cabin, either, with its four adult-sized seats and its low-slung driving position. Or those clever frameless windows, which drop a few millimetres when the door is opened before sealing Tupperware tight. You can't even grumble about the level of specification, which includes all the must haves such as anti-lock brakes, electric windows, central locking and a driver's airbag (with the notable exception of a stereo) and eshews unnecessary items such as sunroof and imitation wood trim. Then there's the BMW build quality, backed up by a three-year 60,000-mile warranty all wrapped up and delivered for under £20,000.

It is the combination of these individual talents that add up to such an impressive whole. And if I'm beginning to sounds like a BMW salesman, it's entirely unintentional. Hell, it must be the easiest job in the world. Now, where did I put my application form? 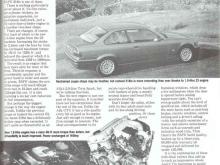