It's a terrible quandary for the executive trying to choose his next company vehicle — there are just too many good cars from which to choose.

Cars have become so much a part of business remuneration these days that most executives don't even think twice about the fact that they've a company car parked in the garage.

That's until it comes time to renew the lease or consider the rewards of, perhaps, a promotion

Then the quandary begins and with so many options to consider these days it's a very trying time, decisions, decisions — local or imported, sedan or sporty.

To help make the decision a little easier we've gathered together three likely imported contenders (after all we did look at the locally produced contenders in the previous issue of Which Car?) and given them some red carpet scrutiny.

Honda's Accord is the biggest seller in this market segment so it was an obvious contender, BMW has just upgraded its popular 318 with a new engine and some extra equipment and then there's the new kid on the block, Peugeot's 406ST.

The French maker has just added an automatic gearbox to its stylish, and award winning, new sedan, but does that make it the automatic choice?

Sourced from the company's South African plant BMW added the 318is to its range at the beginning of this year and for a BMW it offers a well priced and equipped car from the German maker.

The 318is sedan not only features the more powerful 1.9-litre multi-valve engine, producing 103kW, but also gains significant additional features such as alloy wheels, cloth and leather combination seats, front fog lights, full colour coded bumpers and that most vital of all features an outside temperature display.

All this on top of the 318i's specification which includes twin airbags, ABS, climate control air-conditioning, seat belt pretensioners and a high quality sound system.

On the road there's the usual BMW level of refinement and handling that has come to be expected from the highly developed chassis that underpins all the products of the German car maker.

However, we did notice a few panel gaps that perhaps weren't up to BMW's usual high standards and some variations in trim that also seemed a little out of place in a BMW.

The four-cylinder engine is a vast improvement on the 1.8-litre, 85kW, unit that powers the 318i, providing quite brisk acceleration and proved responsive even though it was coupled with a four speed auto gearbox.

This despite the fact that it is basically lugging around the same weight as a 328i, which sports a 2.8-litre six cylinder engine.

One bonus with the new engine is that unlike most BMW models it can be run on standard unleaded, although best performance is had by using a higher octane, and more expensive, Premium ULP.

The cabin has a distinctly BMW feel including the familiar all black BMW instrument cluster surrounding the driver. Everything is placed in the perfect position and all the controls are easy to use.

The BMW handles, brakes and performs as we've come to expect from this maker, allowing for the the smallish engine.

Seen in the light of the competitors such as the Peugeot 406ST and even the Audi A4 (not tested here) it is very expensive.

The Peugeot and the Honda both have most of the equipment featured on the BMW and the Peugeot certainly is of a comparable quality yet it costs about $14,000 less.

A lot of money to have the famous blue and white badge sitting in your garage.

The choice is obvious, isn't it. Well, perhaps not quite as obvious as it might seem in reality.

The best car of this bunch is the BMW 318is despite the reservations with which we approached its 1.9-litre engine. It offers a fine balance of handling and performance coupled with an accommodation package that's designed to appeal to the market, with enough touches of leather to give the car a feeling of luxury.

However, and this is where we bite the bullet, the price of $56,000 is a pretty steep ask really for a car that doesn't offer anything more than the Peugeot 406ST except the spinning propeller badge. We think that $14,105 is a lot of money to pay for a badge but if you can convince your accountant its worth it then go for the BMW, it's a damn fine motor car.

The Honda Accord is the biggest seller in this market and the strength of its sales can't be denied. A lot of that is the result of aggressive marketing, and heavy discounting from its list price of $46,950, which makes it a much more affordable option than the BMW and a slightly more expensive on to the Peugeot.

However, it is a little out of its league here with handling that is not up to the level of either the BMW or the Peugeot. The VTi-S model does offer leather trim for another $5000 but even that still leaves it behind our other two contenders we feel.

There is a new Accord coming later this year and we'll look forward to putting this Honda up against the main contenders again when the new model arrives.

The Peugeot is a sharp handler and a good performer, even if its bulk does the engine no favours, which offers trim and equipment levels that match the BMW almost blow for blow.

With the space, dynamics, comfort and standard features of the Peugeot 406 it qualifies for genuine bargain status against its imported opposition, provided you accept its weight induced limitations on pace. 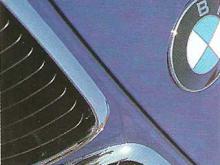 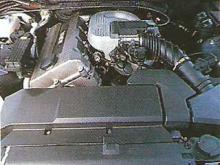 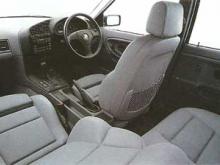 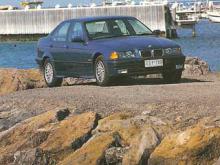