Hard to understand why it's taken BMW so many years to bring the four-door 318is to Australia, but here it is: the M44 engine (also spinning in a 318is Coupe, 318ti Compact or Z3 near you) plus a few other extras, now appearing in its heaviest overalls.

From a short drive, this car presents a couple of mysteries. First is the engine, which feels stronger in this car than it does in the lighter Z3. In the little roadster, and also in the 318ti Compact, this twincam 1.9 seems an over-vocal and ultimately disappointing engine. Less so in the 318is.

Without proper track test figures, it's hard to say if the engine feels better in the sedan simply because you expect it not to, but it certainly performs better against expectations than it does elsewhere.

Cammy tuning means there's not much happening at low revs - drop below the go-zone or miss a gear and you might as well be driving in sand - but things start to liven up at around two-and-a-half. From 3000rpm the car earns the 's' at the end of its badge.

Kept in its powerband, this is a fairly sporty sedan with a suspension that rivals have not bettered in more than half a decade. That said, the setup in this instance is more fidgety than usual.

The second riddle is the price. At $55,100 the manual version costs $850 less than the Coupe. To our eyes there's little to choose between 3 Series bodystyles. The ubiquitous, frequently blacked-out and ground-scraping Coupe may be more overtly sporty-looking, but its lines suck from some angles and it suffers from association with super-wealthy teenagers. Call us old-fashioned, or just old, but we prefer to pay less for more.

And just to prove how much less is more at BMW: if you lost the roof, two doors, two seats and half the boot, buggered with the proportions, fitted a suspension design from 1991 and upped the price by $10,800... you'd have a Z3. 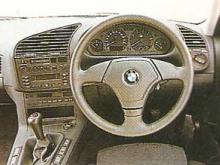