The main development objectives were to maximize power output and torque and to maintain high quality standards and long life, with even easier maintenance and servicing. And, above all, to combine these objectives with the silky smooth running of an inline six-cylinder engine. 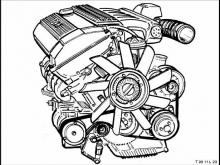 Despite its use of four valves per cylinder and its higher performance, the M50 weighs only slightly more than the M20.

• Less energy is lost during gas exchange, so that power output and torque are higher at all engine speeds. This, in effect, raises the maximum torque value from 222Nm/168 lb. ft. of the M20 to 245Nm/181 lb. ft. for the M50, while also ensuring higher torque values throughout the entire speed range.
• Ideal spark plug position. Flame paths inside the combustion chamber are all equally short, to raise the knock limit. A higher compression ratio can be utilized to increase thermal efficiency and make better use of the energy potential in the fuel.
• Reduced moving mass at each valve. Lower (closing) force valve springs can be used to reduce frictional losses while still ensuring that the valves follow the cam contours even at high speeds. 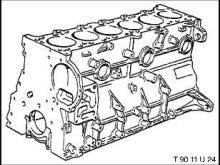 The grey cast iron crankcase possesses exceptional torsional rigidity, yet is approximately 5 percent lighter than the M20 crankcase. The cylinder bores are siamesed (cast together in pairs) using the same design principles as on the M20 engine. 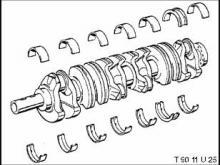 The crankshaft is a spheroidal graphite casting supported by seven main bearings with 12 counterweights. Precise design measures have reduced the crankshaft weight of the M50 by approximately 3 kg (6.5 lbs) compared to the M20. 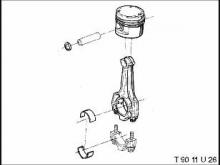 The piston crowns incorporate a symmetrical combustion bowl and are notched for valve head clearance. Oil jets mounted in the main bearing oil supply spray oil into the underside of the piston crown for piston cooling.

The forged connecting rod has been redesigned to reduce weight by 10 grams compared to the M20 which promotes a smooth running engine and ensures reliable operation even at higher speeds. 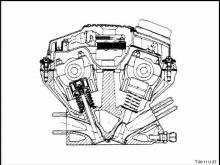 The most important design feature is the crossflow cylinder head with four valves per cylinder, double overhead camshafts (DOHC) and bucket-type tappets with hydraulic lash adjusters.

Compares with the M20, the intake and exhaust port areas, exposed when the valves are open, have gone up by 40 percent. Mixture flow through the intake valves is 30 percent higher. Cylinder filling is therefore more complete and the charge-exhaust cycle more efficient.

The combustion chambers are ideally shaped for short flame paths and uniform flame propagation. This makes for efficient combustion and a high level of thermal efficiency, and therefore high specific power output with good fuel economy and low exhaust emissions.

The intake and exhaust valves are arranged in a V pattern, and use dual valve springs to ensure rapid, bounce-free closure.

The self-adjusting hydraulic tappets simplify maintenance, eliminating routine valve adjustments. Fluctuations in performance or exhaust emission levels due to valve clearances changing are a thing of the past. Valve train noise and thermal load on the valves are also reduced due to permanent contact between the camshafts and tappets. 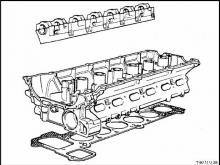 The double overhead camshafts are hollow castings (M20: solid castings) and rotate in seven bearing journals. The camshaft housings are separate components which permit removal of the camshaft and self-adjusting hydraulic tappets without cylinder head removal. 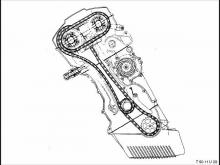 In view of the higher loads imposed by the new valve train, the camshafts are driven by single roller chains which are lubricated and cooled by oil spray jets.

The main drive (primary chain) connects the crankshaft to the exhaust camshaft, with a guide rail on the tension run of the chain and a hydraulically dampened tensioning rail.

The secondary chain runs from the exhaust to the intake camshaft and also has a guide rail and a hydraulically dampened tensioning rail. 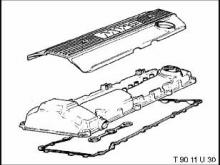 The ignition leads for the direct solid-state distribution system with its six individual coils are integrated into the cylinder head cover.

An oil trap is also integrated into the cylinder head cover. A labyrinth formed by cast webs is sealed at the bottom by a sheet-metal cover with moulded rubber seal. Return openings in the webs allow the trapped oil to flow back into the cylinder head. The almost oil-free fumes that remain are conducted to the intake manifold for combustion, in order to comply with pollutant emissions legislation.

An oil shield on the intake camshaft reduces the oil splash accumulation in the crankcase breather. 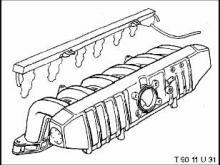 The single-piece plastic intake manifold with its optimized intake pipe lengths and cross-sections provides a torque curve which ensures immediate response and good flexibility in all engine-speed ranges.

With a weight of approx. 3 kg (6.5 lbs), the plastic air intake system is about 50% lighter than a comparable aluminium system. Its very smooth inside walls make additional treatment unnecessary. The resulting drop in flow resistance ensures optimum operating efficiency.

The oil pump is a "Duocentric" also known as an Eaton Rotary type of tandem design (similar to M70 oil pump).

The pump is bolted to the engine block in the oil sump, and driven directly from the crankshaft by a single roller chain with a tensioner.

A single-piece gearbox support is integrated into the oil sump so that a separate stiffener is not needed. This rigid link between engine and gearbox reduces vibration loads on the entire driveline, and therefore keeps noise transmission low.

The oil filter is mounted vertically on the intake side of the engine. The paper filter element is accessed from above when replacing it. 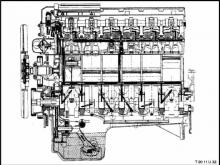 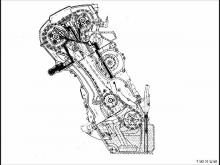 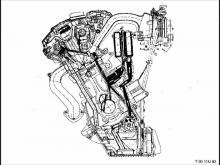 Oil supply to the valves and crankshaft, with spray cooling for underside of pistons 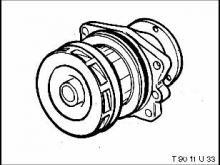 The cooling system incorporates a new style water pump which is integrated into the timing case cover (similar to M70). The pump features a ceramic axial seal, a plastic impeller wheel, and an aluminium pump housing which promotes a longer working life, reduced weight, and high efficiency. 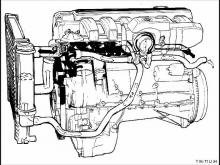 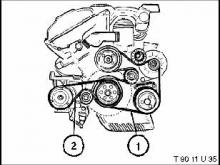 All accessory component rotary drive is accomplished with two poly-ribbed V-type drive belts. Once correctly installed the belts are self-adjusting with automatic hydraulic tensioners and thus are maintenance free.

The M50 is the first engine to use the latest Digital Motor Electronics management system designated DME 3.1. The control unit size has been reduced to occupy 40% less space than previous DME 1.3 control units.

The M50 control unit contains two computers instead of one:

DME 3.1 can process more information considerably faster in the same period of time as DME 1.3.

The extended functions of DME 3.1 control unit, i.e., six individual output stages for the fuel injection and six for the ignition system, calls for a control unit with 88 pins.

In comparison to DME 1.3 the number of items in the diagnostic system have been greatly increased. Up to 30 malfunctions can be memorized, with an automatic scale of priorities according to the importance of the fault. Workshop personnel can obtain a readout of the stored data with the Service Tester or MODIC.

All data values needed to ensure correct and reliable engine operation are accompanied by substitute values, so that in the event a fault should develop, i.e., a missing input to the control unit, an emergency run program allows the vehicle to be driven to the nearest BMW Dealership for repairs.

Fully sequential injection is used for the first time on the M50 engine. All six injectors are controlled separately through six individual output stages in the Motronic Control Unit in contrast to semi-sequential fuel injection (M42, M30, M70) which meters fuel to pairs or groups of cylinders only.

Fully-sequential fuel injection means that conditions at every cylinder are ideal for the formation of precisely controlled and correct fuel-air mixture.

• Injection timing is varied to suit the engine's momentary operating condition.
• The length of the injection is matched to the needs of each individual cylinder.
• The injectors are included in the diagnosis system.
• Fuel is delivered to all six cylinders at once during cold starts.
• Primary ignition circuit monitoring. 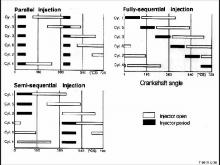 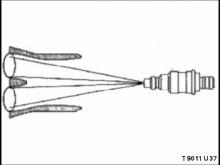 The M50 utilizes a new version of fuel injector nozzle with a double-spray pattern instead of a single-spray pattern. The new fuel metering principle also optimizes injector sealing when they are de-energized.

An inductive transmitter on the camshaft drive gear identifies the fuel injection and ignition sequence. This ensures the correct injection order immediately after the engine is started (cylinder 1 is identified). 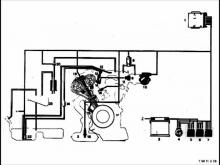 The solid state ignition system of the M50 is controlled through six individual output stages in the DME 3.1 control unit. 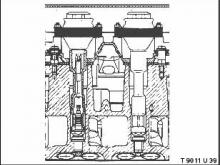 Each cylinder has a separate ignition coil rated at 30KV which is bolted to the cylinder head directly above the spark plug. The new direct ignition system eliminates the following causes of engine misfiring:

mechanical wear (carbon brushes) as on a rotary ignition distributor system;
leakage voltage (arcing) as a result of moisture, road dirt or salt;
risk of damage to ignition wires by rodents 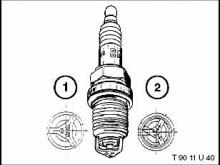 Spark plugs with the triangular ground electrode concept, introduced on the M42 are also used on the M50 engine. In order to cope with the extremely rapid combustion process of a four valve engine the tri-electrode spark plug was developed for BMW. The electrode gap is 0.8mm ± 0.1 mm and requires no adjustment. The resistance value of the spark plug is > 1 KOhm.
1 NGK
2 BOSCH 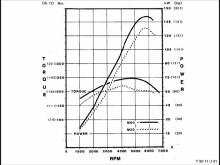 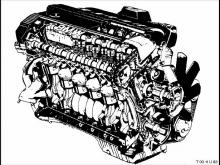