With the introduction of the M42 powered E36 models, the successful and proven M42 four cylinder engine has been revised. 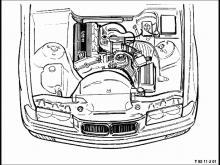 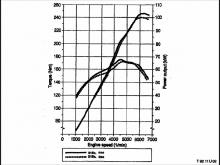 The differential air intake system (DISA) offers the advantages of both short and long intake pipes, which contributes to improved power, torque and fuel efficiency. 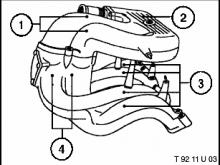 With the connecting flap valve closed, the primary pipe and the ram air pipe act together as a single, long air intake pipe. The column of air oscillating in this combined pipe significantly increases engine torque in the medium engine speed range. 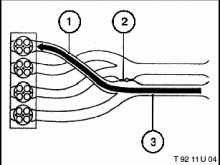 In order to obtain more power at higher engine speeds (above approx. 4800/min), the connecting flap valve between the intake air pipe assemblies for the two cylinder groups is opened. This largely eliminates the dynamic effect of the air in the primary intake pipes. The shorter ram air pipes now take over and yield greater power at the upper end of the engine-speed range. 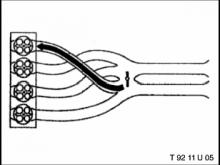 The DISA connecting flap valve is actuated electro-pneumatically in response to a signal from the engine control module. The flap valve begins to open as engine speeds rise above 4840/min, and closes when the speed drops below 4760/min.

The action of the valve is deliberately delayed (hysteresis) to prevent it from opening and closing repeatedly within a short time. 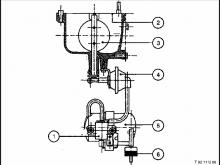 In the part-load engine operating mode, the vacuum reservoir is evacuated by intake manifold vacuum. The connecting flap valve is kept closed by the vacuum can and pneumatic actuator.

If the engine speed of 4840/min is exceeded, the engine control module de-energizes (switches off) the solenoid valve. This vents the vacuum can, so that the flap valve can open.

As soon as the solenoid valve switches over again (when engine speed drops to 4760/min), the vacuum reservoir and the vacuum can are connected together again and the flap valve closes.

This form of control ensures that the connecting flap always remains open if there is any malfunction of the electro-pneumatic actuating mechanism, and therefore that full power output is guaranteed in the upper engine-speed range.

In other words, the flap valve's basic setting is "open".

The flap is held open or returned to the open position by two springs:

The solenoid valve is actuated directly by a high-power output stage in the engine control module. This output stage can accept a maximum electrical load of approx. 1 Amp.

The new knock control system is incorporated for the first time on a U.S. BMW model which also contributes to the improved performance of the E36 M42 engine.

If an engine runs for any length of time with knock occurring, it may suffer severe damage.

Knock is encouraged by:

An artificial increase in the compression ratio may also be caused by carbon deposits in the combustion chambers, or as a result of an unfavorable combination of manufacturing tolerances.

If the engine has no form of knock control, the ignition timing has to include a safety margin to allow for such unfavorable influences, so that efficiency is automatically lowered in the full-load operating range.

Knock control enables the engine to run right up to the knock limit, since it retards the ignition (on the affected cylinder only) when the actual risk of knock is detected. The normal ignition timing can therefore be chosen for optimum fuel consumption and operating efficiency, without allowing any safety margin for influences which could cause the knock limit to be exceeded.

The knock control system adjusts the ignition timing sufficiently to avoid engine knock and will allow the engine to run satisfactorily (but with reduced power) on fuel of a lower octane rating than the recommended unleaded premium. Thus, if the owner accidentally gets a tank of inferior gasoline, the engine will not be damaged immediately.

· avoid damage caused by knock even in the most unfavorable circumstances
· maximum economy, since the energy in the available grade of fuel is fully utilized and the engine's operating condition is taken into account
· fuel consumption is reduced and torque maximized throughout the upper engine-load range, particularly when the DISA system increases the mixture charge entering the cylinders.

A multiplexer circuit in the engine control module analyzes the signals. This ensures that only the signal from the cylinder in which combusion is actually taking place is transmitted to the adjacent knock sensor. The multiplexer is switched correctly by evaluating the signal from the cylinder identification sensor (on the camshaft). The knock sensor is a piezoelectric conductor-sound microphone with a broadband characteristic. A piezo-ceramic ring is clamped by a spring washer between a seismic mass and the sensor body. If the seismic mass is accelerated, it exerts a force on the piezo-ceramic element. Opposed electrical charges build up on the upper and lower ceramic surfaces, and generate a voltage at the contacts. In this way, acoustic vibrations can be converted into electrical signals. These in turn are transmitted by shielded wires to the engine control module for processing. 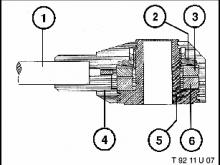 The knock sensors are bolted to cast bases on the intake side of the engine block, between the 1st and 2nd and between the 3rd and 4th cylinders.

These locations ensure that even when knock is only slight that the acoustic vibrations emitted from the combustion chambers are transmitted reliably to the knock sensors.

If the actual value exceeds a predetermined value, the combustion process in that cylinder is identified as "knock". The ignition timing is then retarded immediately in that cylinder so that knock is eliminated.

After this, the ignition is advanced again step by step until the optimum value as stored in the mapped ignition program is reached, or until knock is once again detected.

The ignition is retarded even if knock is only slight and does not yet represent any acute hazard for the engine.

Knock control is out of action at engine temperatures below 35° C (95°F) and at low loads (below approx. 1/3 volume air flow sensor load signal).

If noise from the engine is unusually loud, reliable knock identification cannot be guaranteed (for instance above-average valve closing noise caused by a defective hydraulic valve lifter (HVA) or one which is malfunctioning due to lack of oil).

If a fault is detected in one of these tests, the knock control is shut down. An emergency program takes over ignition timing control, and the fault is stored in the fault memory.

The emergency operating program ensures that the engine can run without risk on fuel with a minimum octane number (Research Method) of 91. It takes load, engine speed and engine temperature into account.

The diagnosis routine is unable to detect whether the plugs for the two sensors or the sensors themselves have been accidentally interchanged.

During service work, assure that the sensors are connected correctly (see Repair Manual).

The knock control and differential air intake control functions have been added to the Engine Control (DME M1.7) system.

The engine control module has been revised in design so that it still needs only one circuit board despite the additional functions.

The engine control module initiates and monitors the following functions: 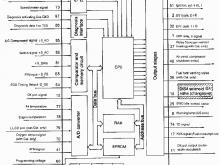 The M42/E36 engine is equipped with an integrated primary/secondary crankcase vent system, in order to keep the level of moisture condensate in the intake air passing through the throttle body as low as possible. This avoids contamination of the idle speed control valve and the throttle body.

The primary crankcase vent operates through a large-bore flexible hose which discharges into the air intake system ahead of the throttle body plate (butterfly).

The secondary crankcase vent discharges into the air intake system by way of a channel integrated into the throttle stub pipe housing. In this channel there is a 1.8 mm diameter nozzle to control the flow volume. 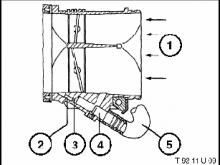 Two heating elements on the throttle body, through which the coolant flows, ensure that the crankcase vent system is intensively heated.

A new dual electrode spark plug is used in the E36 M42 engine which features 2 nonadjustable electrodes and a 14mm thread. The new spark plug, Bosch designation F7LDCR (or NGK BKR 7EK), is designed specifically for the M42 powered E36 models and is not interchangeable with the E30-M42 Tri-Electrode spark plugs.

A redesigned catalytic converter distributes the exhaust gas uniformly as it enters the converter through a lateral discharge outlet, so that it strikes the entire surface of the monolith. This improves durability and ensures that emissions from the exhaust system are reduced to a consistently low level. 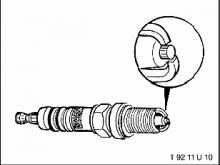 Noise radiating from the converter casing has been reduced by using a rigidly constructed inlet cone of smaller diameter.