New Eleanor Ford Mustang project for B is for Build

Today B is for Build announced their next project -- a car that looks like "Eleanor" -- the 1967 Ford Mustang Fastback out of the Gone in 60 Seconds movie -- but is built out of a 2015 Mustang GT.

Unfortunately the timing of this project wasn't great as another Youtuber, vTuned, started on a similar project very recently, although their plans are a bit different and vTuned is not building an Eleanor replica.

B is for Build video's comments were full of plenty of talk about the two projects and comparisons.

vTuned is starting with a 1966 Mustang coupe and fitting the engine from a wrecked 2015 Ford Mustang GT. He is also planning on fitting many other parts of the donor car including much of the suspension and running gear and even the dashboard.

B is for Build are using their late-model Mustang as the basis for their project then adding various body parts including using an early Mustang coupe to fastback conversion kit.

Both projects are very ambitious and having watched vTuned already remove so much of his 1966 Mustang and hearing about B is for Build's plans, it's going to be interesting to see how each one turns out and if either can actually pull off what they plan. 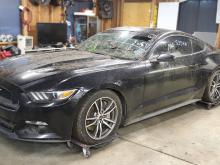 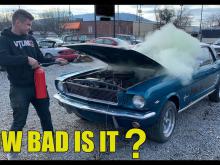