After my last cheap dashcam failed I decided to buy another cheap one off eBay.

This one is a good size - even smaller than the last one - and fits nicely behind my rearview mirror. It also has the USB port at the top for good cable positioning, and a built-in battery so you don't lose the last recording when you switch the car off.

It came set up for the Chinese language so the menu was impossible for me to understand, but I eventually found the setting for language and changed it to English.

I changed it to 1080P (of course) and set it up in my car to test. I also set it to record as soon as the car is started (the default setting), and turn off when the car is turned off (surprisingly not the default).

There is no button to press to save recordings but the 16GB memory card I use holds footage for just over one day so that isn't an issue for me.

The first problem I encountered was when I tried to get the footage off. I tried connecting the memory card to a Windows 10 PC but it was not recognised. I then tried to connect the dashcam to the same PC using a USB cable but it only worked as a webcam. The instructions pointed to a setting to change the USB mode from webcam to USB disk but this setting does not exist.

Fortunately, the memory card did work in a Windows 7 PC so I have been able to get the footage off. If connected using a USB cable, the dashcam functions as both a webcam and a USB disk, so it looks like there has been a software upgrade so the USB mode setting is no longer required.

The default setting is to create files every 3 minutes. The webcam creates AVI files. With the file length set to 5-minutes (other options are 1 minute and 10 minutes) the file size is about 600-700KB. There is a small gap when a new file is created of approximately 1 second.

The picture quality is not very good, worse than the last camera which was 1280x720. If you want to read a number plate the car has to be stopped and right in front of you.

The instructions say that the field of view is 120 degrees and it certainly does seem to be quite limited. The seller I bought from claimed 90 degrees, which may be more accurate. Some sellers advertise these as 170 degrees! The limited field of view means that anything not directly in front of the car does not get recorded, so makes it not a very useful dash cam.

It has a microphone and the sound level is high and the recording quality is reasonable. It also has a night vision LED.

It also has a G sensor and setting to turn on and record if it is turned off and there is an accident, such as someone running into tour car when parked. I haven't tested this.

Overall I couldn't recommend this as a serious dashcam and the incompatibility with Windows 10 will be a major problem for many people.

The following are some footage taken in the dark and light recorded in "1080P mode" (1280x960) and uploaded to Youtube:

I've also included a picture of a single frame captured from a recording done in "1080P" mode. 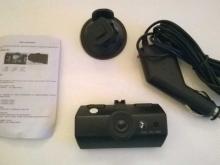 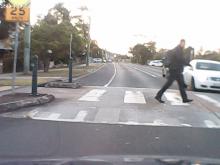 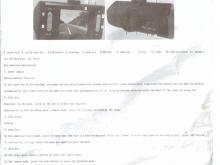 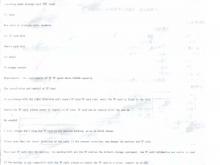 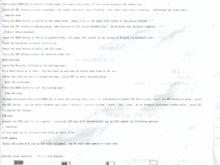 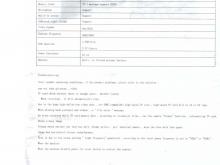