I thought it might be fun to get a cheap car dashcam so I could record some of the interesting things I often see on the road and share them with Dash Cam Owners Australia on Youtube (one of the highlights of my month is when they put up a new video).

I studied eBay and thought that a budget of A$15 should get something that could be used for this purpose.

I wanted something small that would fit behind the mirror and not be blocking my vision or make me stand out as one of those people with devices all over my windscreen.

I chose this one because it looked small, and had a top-mount power socket so I could run a wire unobtrusively under the roof lining and down the inside of the A-pillar trim.

The DVR is unbranded so you will have to go by the pictures if you want to try and find the same unit. The manual mentions NT96220 which is a common processor by Novatek used on cheaper models. One website says of this chipset: "720P 30fps, (1080P 25fps interpolation), M-JPEG (NOT H.264, double file size), NO WDR, NO GPS. ...should be avoided due to their low quality. Many poor quality dashboard cameras come with these 2 Novatek chips due to the low cost of the processor."

It came in a box which is unusual for cheap devices from China on eBay. It also came with a manual in both Chinese and English. As you would expect the manual is pretty bad and there's lots of mistakes and poor English writing.

A car cigarette lighter power adaptor with a long cable was included. The DVR has a built-in rechargable battery too.

It has a 3-inch 16:9 LCD screen that is useful for positioning the unit, playback, and operating the menu.

Straight out of the box, the dash cam starts recording a few seconds after being plugged in or starting the car, and switches off and saves the current file when unplugged or the car is switched off.

If you want to keep a recorded file you can press a button and the current file will be protected from being overwritten. The device also has a G-sensor and will do the same if it detects a certain force, like that in an accident.

I'm not sure how you unprotect a file (delete it I guess), and I'm also not sure what happens if a file is protected just a second or so after a new file is generated. I'm guessing it won't protect the previous file that might have had what you wanted to save.

There is a microphone and it records sound by default, but this can be switched off in the menu.

You can also adjust the recording length (1, 3, 5 and 10 minutes) and turn on motion sensing recording if you like. I am not sure if that is the feature that protects a file in the event of an impact, or whether this is that type of feature where the unit will turn itself on and record if it detects aa significant force while turned off.

Date and time stamp recording is also enabled by default and setting the date and time is fairly quick and easy.

The video resolution is set to the maximum by default which turns out to be 1280 x 720 px rather than the "Full HD 1080" advertised on the box and also displayed on the screen.

It is meant to have night vision but I haven't tested this yet.

I am also yet to test the HDMI output (requires a cable with a mini HDMI plug) but from reviews of cheap Chinese dash cams I won't be expecting it to actually work.

When connected to a computer using a USB cable (requires a cable with a USB Mini B plug, not included) the device acts as a storage device and you can copy files from it. It's not quick. It was copying at a rate of a little over 2 mb/second and the file sizes are around 400 - 500 mb.

Each video file contains approximately 5 minutes of footage by default. There does not appear to be a gap between each file, unlike some similar DVRs.

I was not able to open most of the video files in Windows Media Player as it reported the files were corrupt. I was able to open them using Windows Live Movie Maker though.

The video quality is quite poor. It is impossible to make out registration plates unless on a car right in front of you and when not moving.

See below for some sample recordings, including driving in the rain.

It is claimed to have a 170 degree lens on the box but the manual says 120 degrees. From what I can see, I would guess the manual is correct.

In summary I would say that for A$15 it does the job of a basic car cam and is better than some, but if you want something to record evidence and identify registration plates you should look at a more expensive product.

Update 11-Jan-2018: I left the dashcam attached to the windscreen all day on one of Sydney's recent 40+ degree days and at first it would not turn on when the car was started. But it started straight away after being turned off and on again by the switch.

Update 29-Mar-2018: Finally got around to adding some night time footage. Video quality is not great in very dark conditions. It does improve under street lights but approaching headlights cause a lot of glare. Perhaps my dirty windscreen contributes to the poor quality though.

Update 10-Sep-2019: I can't use the camera anymore. I took the Micro SD card out to copy some video files but when I put it back in it would not recognise the card. I tried formatting and I tried a new card. Nothing worked so I gave up on it. It also stopped working whenever it got hot so it was not possible to leave the camera on the windscreen when parked. I've got a new dashcam now, and it's even cheaper. 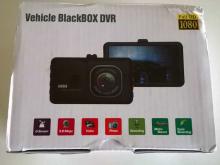 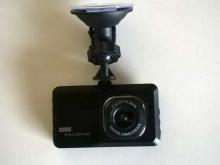 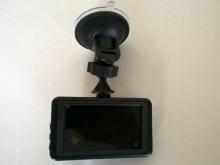 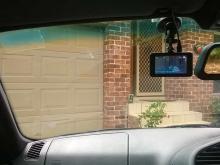