Due to a combination of my aftermarket supercharger and 240,000km of engine wear on my 1998 BMW 318is, I get quite a bit of oil through my PCV/CCV system that clogs the valve and gets sucked back through the intake system.

In an attempt to keep the system cleaner I decided to fit an oil catch can.

After a little online research I learn that the cheap oil catch cans are generally not of much use as they are generally just empty containers, and a good catch can should have baffles and/or other components in place to actually catch the oil and stop it from being sucked back into the intake.

But not wanting to spend too much, I scoured eBay for the cheapest baffled oil catch can and found this one (image below) which claimed to be baffled and was less than A$60 shipped to Australia. There were no pictures to show what type of baffling it had but I took a chance that it would be sufficient. Plus, to fit the catch can comfortably, it needed to have the connections at the same end, and ideally I needed certain size connectors.

The catch can comes with two sizes of connectors. It also comes with a filter, should you want to release vapour to atmosphere and a plug that you can use in place of the filter. It also comes with mounting hardware and some pipe. It has a clear pipe on the outside to show the oil level and a drain plug at the bottom.

I purchased one of these catch cans from China and it has recently arrived. I can now see the baffle and I'm not impressed. The baffle is just a plate with a couple of holes in it that separates the top third of the can from the bottom two thirds of the can. Both inlet and outlet (no difference between them) flow into the top chamber and there's nothing stopping the oil being sucked straight from one hose to the other.

Unfortunately, the can is all welded together as one piece, so can't be pulled apart to improve the baffling with something like some steel mesh.

Anyway I will give it a try and see if it catches much oil. Stay tuned for updates.

So down to installation.

Although the PCV/CCV can be eliminated, from my past experience running no PCV/CCV, the idle was crap and reinstalling this valve made a big improvement.

I could mount the catch can after the valve, but I seem to be going through these valves often as they clog with oil, so hopefully with the catch can before the valve I won't be replacing them as often.

I won't be running the filter supplies with the catch can, and I don't like the idea of the clear tube to monitor oil level so I am eliminating this with the purchase of a couple of plugs (1/8 BSPT, but the thread length shouldn't be longer than 6mm). I will drain the can when I do an oil change.

The drain plug provided doesn't seem to fit well so I might have to get an extra plug for that too (1/8 BSP).

I bought a piece of shelving bracket that I have cut to size and mounted to my firewall beside the fuse box, as on my BMW E36 there is some handy mounting holes there, and I can mount my boost gauge sensor to the same bracket. The catch can came with a hose clamp and matching hose clamp bracket which fits well to my mounting bracket.

I will report back with photos once I have it installed.

In the meantime, which catch can should you buy? Most of the cheaper eBay ones don't have any baffles at all. This one has baffling which is probably close to useless. There are some higher quality cans which do have proper baffling and/or internal filtering but I found it hard to find one that has the right size connectors (to avoid needing various adaptors) and some have pressure relief valves which I was concerned could upset a closed system.

The best advice seems to be to buy a high quality (expensive) can specifically for your vehicle, or follow one of the several DIY online guides where you can modify a cheap eBay catch can and add proper baffling and filtering.

I have been running with the catch can for quite a few months now and finally got around to checking what it had collected.

Inside was a reasonably amount of oily mess, closer to water in consistency than oil. 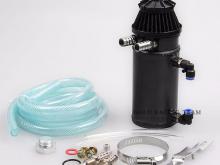 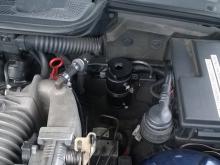 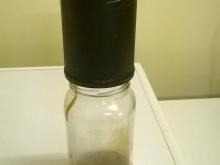