I recently replaced the fuel filter on our 1998 Holden Commodore Acclaim with the 3.8 litre V6 engine. I found that the instructions I had found online for how to remove the fuel pipes did not work for me so here are some instructions for how I did it.

Before you start on this job you should relieve fuel pressure. I did this by leaving the car running and then pulling out the fuel pump fuse.

Firstly, if you aren't sure where the fuel filter is located, it is accessible from underneath and behind the car, just next to the differential and on the right side of the car.

I backed the car up on to ramps so that there was plenty of room to work in, but you don't necessarily need to lift the car at all.

The filter is held in place with a plastic clip which is easy to remove, but you are probably best leaving that until after the hoses have been removed.

To remove the hoses some people say to squeeze them, possibly using pliers, and that they break easy. I found that no amount of squeezing would release them.

Before you take it out make note of which direction the filter is installed.

It's a simple job that should take only a few minutes, depending on how long it takes you to work out the clips. 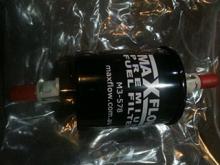