On the intake manifold there is a air pipe connection that over time can come loose. Then, usually when starting the car, this connection can blow off resulting in a large vacuum leak. The car will be reluctant to start and run, idle badly, and have no power brakes.

The fix is to replace this connector and o-ring, but for a temporary fix you can usually just plug it back in. On my 325i the previous owner had ran a cable tie around the intake manifold to secure this connector in place. I suffered the problem twice in only a few months but didn't get around to replacing the part before I sold the car.

The connector is located on the engine side/underside of the intake manifold almost opposite of where the air intake goes into the manifold. The connector is held in place by a clip only on one side.

For replacement the part numbers are below. Note that there are different part numbers for pre and post February 1992 models. My car was a 1991 model and I don't know if the problem effects the post February 1992 models, or possibly even the M52 engine too. I also don't know if the later part is improved and interchangeable. Do you know? Please leave a comment. 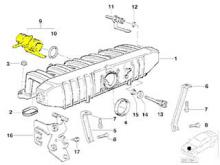