I've recently come across the brand BAPMIC when shopping for BMW parts, and they are usually some of the least expensive parts available. Are they any good?

According to their website (www.bapmic.com), BAPMIC was established in Germany and have been operating for around a decade, or possibly a lot longer based on their website's copyright date of 1994.

However, their logo is trademarked to a Chinese organisation, Shanghai Tongzhi Auto Parts (website), who also have trademarks for two other auto part brands: Autopa and Topaz.

Shanghai Tongzhi Auto Parts (Tonzie) was established in 1998 so I am guessing they might have bought the BAPMIC brand name at some point.

I think it's safe to assume that their products are made in China (their Linked In profile confirms products come from factories in China).

Strangely their website mentions to only contact them for legal reasons and although it makes mention of sales offices in many countries (including Australia), there are no contact details for them.

Internationally they seem to be known as Sourcemost International (www.sourcemostmotor.com) and have an office in Mt Kuring-gai, Sydney.

I couldn't find many reviews for BAPMIC products but there were a few.

Amazon had some reviews of BMW E46 control arm bushes. Although most reviews were very positive there were a significant number of people who said the bushes failed after a short time.

Of the other reviews, I found there were usually around 20% negative reviews, mostly claiming low quality or short lifespan.

So far I have bought two BAPMIC parts for my 1998 BMW 318is coupe: a pair of front sway bar links, and a camshaft sensor.

The sway bar links look good quality and have been fitted and made a noticeable difference to the car, but they did replace parts that had been in there for a couple of hundred thousand kilometres so anything probably would have made a big difference.

They have only been in for a few months so far but I have no complaints.

The camshaft sensor has only just been fitted and is working fine so far but I will keep this post updated.

Based mostly on other people's reviews and not my own experience, it looks like BAPMIC is just another cheap, low-quality Chinese brand of car parts. You should weigh up the cost and expected lifespan compared to genuine or known good brands, and consider the labour time and cost involved if you need to replace the part more frequently. Also consider safety and reliability and what would happen if the part failed. 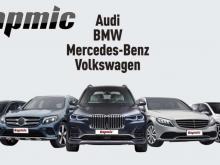