Goonzquad is a huge channel and follows two brothers who rebuild cars and trucks.

Their projects have included a few Jeeps, a Corvette, Dodge Hellcat, Ford Mustang, Camaro, Dodge Viper, Nissan GTR and a Honda S2000, and more recently they have taken on some exotics including a Lamborghini Huracan and a Ferrari 458.

They also started on a rebuild of a cheap boat.

This channel became quite famous when they took on a rebuild of a Dodge Hellcat that was pretty much burnt to the ground.

They are also working on a McLaren 570S.

Unwrecked is a smaller rebuild channel also with some VLOG style posts.

Most of the projects are cheaper cars so is a nice change from watching exotic rebuilds.

Danny rebuilds wrecked cars, often with the help of his brother.

Danny has a home garage set up for rebuilds including a frame.

His projects include a Ford Mustang GT, Jeep Wrangler, Dodge RAM, BMW 135i and a V8-powered Mazda RX-7 FD.

This channel follows a couple of guys who have a fully-equipped workshop and have rebuild projects including a Jeep Wrangler, Dodge Ram, Dodge Challenger, Audi A4 and Subaru WRX.

These guys are rebuilding cars in their backyard (hence the name).

Their projects so far have been a Nissan GTR and a BMW M2.

They just bought a frame machine and set it up in a tent in their backyard.

Follows a father and son who rebuild wrecked cars.

A spin-off from Kondor Buildz is the Rebuilder Max channel which follows 14-year old Max and his car projects.

At this time it's a new channel and he has been working on a PT Cruiser, and has also just taken on a Subaru BRZ.

Follows a guy who is buying, repairing and selling cheaper cars.

I've talked about vehcor before.

The channel follows various projects by a guy who has a panel shop.

I enjoy his detailed but entertaining style of videos.

I'm a little bit bored of this channel now but there's still some interesting content about a new Ferrari 360 project.

This fairly large channel follows Randy and his buying, repairing and selling of auction car projects.

This channel started a motorcycle vlog channel but has moved into car projects and car flips. 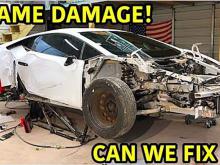