Update on my supercharged 318is

Over the last few weeks I've attempted to sort out a few issues with the car.

Some time ago I ordered some new window slides hoping to fix the issue with my passenger-side window getting stuck.

I finally got around to giving this a go but it didn't go so well. First the door trim mountings - as usual - fell apart when I pulled it off, so they had to be glued together. Again.

And the window went down okay but wouldn't go up more than a cm or two. I did a little diagnosing and was pretty sure that the new slides weren't going to help, and the problem was more likely with the regulator.

So I had to manually wind up the window by turning the motor shaft and put it back together - once the glue on the door trim mounts had dried. Only positive out of it all was that the door trim was now held on better than it has for a while, thanks to a different glue (contact adhesive this time) and some new door trim clips which have foam washers attached.

Next problem to tackle was some increase in noise from the exhaust, which is already noisy enough! It was getting annoying and also fumes were entering the cabin.

I hoped it wasn't cracked headers and I didn't smell or hear anything in the engine bay so that was a good sign.

After a few weeks, I finally got underneath the car and had a good look over the system and found that the welds had cracked around one of the connections in front of the catalytic converter.

I could get these welded but I'm first looking at trying to find a good used factory exhaust system as I would prefer the car to be a bit quieter. 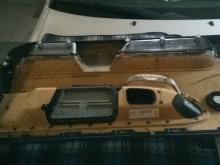 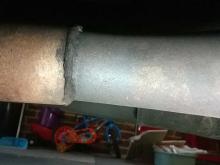 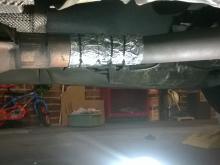 I bought a second-hand original catalytic converter section and have fitted that now. Fitting wasn't so easy as it didn't sit in the right place so needed some "massaging". I'm happy that the exhaust is now much quieter and doesn't smell as much and no fumes are getting inside the car anymore.

When I took out the old exhaust section I discovered that the catalytic converter that was in there was a fake, the whole section was just a straight pipe. 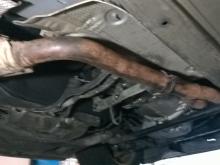