With the introduction of the Phase II S40 sedan and V40 wagon, Volvo’s popular compacts are remarkably improved across the whole range.

About the changes in the Phase II S40 and V40, Peter Horbury, Volvo’s chief designer, says: "Our ambition was not to just create a fresh appearance but also to create a new driving character, with a sense of freshness that makes the cars ready to meet the competition in the new millennium."

More pronounced "flaring" of the front mudguards, new clear-glass headlights and tail lights define a subtle facelift. More to the point and more apparent, the vast majority of changes are beneath the skin and completely tactile from the driver’s seat.

When Volvo Car Australia debuted the S40 and V40 in 1997, the small sedan and wagon signified a styling change within Volvo that would carry through to the S80 sedan, C70 coupe, the new V70 wagon, and most recently the sporty new S60 sedan.

For Volvo Car Australia, following the release of the all-new V70 this year and pending launch of the adventurous all-wheel-drive Cross Country, the new S40 and V40 will play an important role in further strengthening the model line-up.

Pricing across the Phase II S40 and V40 model range has not increased, making them even more competitive.

With improvements in standard passenger safety, better ride and handling and efficient and powerful engines, the S40 and V40 represent excellent value in the compact prestige segment.

The Phase II version’s excellent styling and drivetrain chassis/improvements are matched by its driving pleasure.

The new S40 and V40 have been completely redesigned and re-engineered to achieve considerably improved ride and handling as well as reduced noise and vibration. On the whole, the changes and improvements to the S40 and V40 are extensive. Overall, refinement was a key goal, achieved over a three-year program encompassing more than 2.5 million kilometres of test driving, including forays to Australia.

Engine idle quality, transmission shift quality, steering feel and handling balance, the essence and character the driver feels, have been refined and improved.

The entire front suspension has been substantially revised. In basic terms, it retains MacPherson struts, however, the lower wishbone and steering housing are new. The track has been widened by 18mm, and the wheelbase is extended by 12mm as a direct result of improvement to the suspension’s geometry.

The revised springs and dampers work freely with less bind and therefore Volvo suspension engineers were able to fine-tune the damper rates to effectively yield improved comfort and driving characteristics.

The driver is offered better "feel" without substantial kick through the steering wheel and suspension knock. The S40 and V40 react to driver inputs with more accurate steering control.

Larger tyres accompany the suspension revisions. S40 and V40 2.0 and T wear a larger aspect tyre – up from 195/55 to 195/60 – on a 15x6-inch wheel. The taller sidewall cushions slight road irregularities without dulling the car’s impressive handling dynamics.

S40 and V40 2.0 as well as T are offered with Volvo’s "Comfort" tuned suspension as standard.

The exciting 147kW T4 is offered with a more firmly sprung and dampened "Dynamic" suspension in character with the car’s giant-killing acceleration and athletic handling. The high-performance T4 wears a 205/50 Michelin tyre on the Crater 16x7-inch alloy wheel.

CVVT (continuously variable valve timing) is used on both the T and T4 turbocharged engines to vary the exhaust camshaft timing of the DOHC engine to achieve cleaner tailpipe emissions during cold start and to improve idle quality.

During cold start, CVVT opens the exhaust valves sooner which in turn allows fuel to afterburn in the exhaust manifold to quickly heat the catalytic converter.

The light-pressure T engine always developed impressive torque low within its rev range - the reason for its excellent driveabity and responsive power delivery.

For model-year 2001, driveability and engine performance is further improved in T and T4 by using twin-scroll turbo technology to quicken throttle response and reduce ‘turbo lag’ by roughly half.

Twin Scroll design pairs the exhaust pulses from cylinders 1 and 4, and cylinders 2 and 3, into two ducts feeding the turbocharger’s exhaust turbine to "spin" the turbine up to speed much quicker.

Coupled to the five-speed automatic transmission, the T smoothly converts kilowatts to kilometres per hour. Acceleration to 100km/h from a standing start takes 9.0 seconds. Quicker still with the manual gearbox at 8.5 seconds.

The high-pressure T4 engine’s performance benefits slightly from an increase in engine capacity from 1855cc to 1948cc.

The T4’s peak power outputs remain unchanged at 147kW and 300Nm; however, peak torque is now on call from as low as 2500rpm and flat lines to 4000rpm before falling only slightly.

The five-speed automatic transmission was first offered last year on the S70 and V70. It uses a close-ratio gearing spread to enhance performance without loss of cruising comfort. Most importantly it adapts to the driver, varying its shift pattern to better accentuate the driver’s natural style.

Smooth gearchanges are guaranteed because the engine and transmission "communicate" with each other through bi-directional multiplexing. This means that both know exactly what the other is doing to ensure smooth gear changes and minimise wear.

Volvo’s dual-stage airbag system inflates the front airbags to 70 per cent or 100 per cent according to the level of crash violence, a notable and safer difference between this system and common less sophisticated airbags.

The airbag system is programmed for several crash variables, such as impact speed and whether the front seat passengers are wearing seatbelts, and inflates the front airbags to the correct percentage to ensure maximum protection.

The IC inflates in 25 thousands of a second during a side impact and protects both front and rear seat passengers. The curtain will begin to deflate slowly after about three seconds. The IC remains inflated to continue to protect passengers in the likelihood of follow-on impacts.

Integrated child booster seats continue to be fitted to the rear seat as standard equipment. The booster seat is an important safety feature for children between the ages of 3 and 10 (15kg to 36kg). The booster seat ensures the three-point seatbelt is correctly positioned across the abdomen to avoid injury.

Volvo’s seats are designed for comfort and safety. Besides being adjustable for lumbar support and height, the seats are ergonomically designed to support the spine and upper legs.

Through years of studying thousands of real-life crashes, Volvo has developed the unique WHIPS (whiplash protection system) which is inclusively designed into the front seats. Should the S40 or V40 be hit from behind, the WHIPS seat and headrest reduced acceleration of the head by approximately 40-60 per cent compared to a seat without WHIPS while supporting the spine.

This greatly reduces the risk and severity of whiplash injury.

All S40 and V40 models are fitted with four-wheel disc brakes and four-channel ABS brakes to maximise braking efficiency. Braking force at the rear discs is further controlled and maximises with EBD (electronic brake distribution). EBD biases as much braking force rearward as safely possible without sacrificing vehicle stability.

Standard on the T and T4, Volvo has developed Dynamic Stability Assistance (DSA), a computer system which monitors if either front driving wheel loses traction. If a wheel does suffer traction loss, DSA responds within 25 milliseconds by reducing engine torque to maintain steering control and stability. DSA operates at all speeds above standstill.

The Volvo V40 can be optioned with a foldable nylon net behind the rear seat to separate cargo from occupants. This is in addition to the standard inertia-reel luggage strap and the elastic cargo net.

Quieter on the road

The new S40 and V40 are quieter on-road for several reasons. Much of the drivetrain and suspension vibration is absorbed through more expensive yet more effective hydro mounts - instead of solid rubber. In addition, Volvo’s latest generation of four-cylinder engines is smoother and quieter. The noise level from engine and wheels has been reduced through new and improved noise insulation between engine bay and cabin.

The S40 and V40 are more comfortable to drive and quieter with less noise and vibration from 30km/h upward.

Major changes inside, modest changes outside

On the interior, the dash and fascia are restyled to improve ergonomics and to give the S40 and V40 a family-look in keeping with the S80 and V70. The lamp controls, climate controls and radio are new.

The tunnel console is completely new - with three generously-sized stowage areas - and more accommodating, and comes with an auxiliary 12-volt power outlet.

The power window and mirror switches are located on the doors.

A new upholstery trim is available on the 1.8 – Visby, a fabric with leather accents on the cushions and backrest.

The light colour combination - Oak/Arena - a favourite in the S80 and V70 will also be offered throughout the S40 and V40 range.

Exterior distinction of the Phase II range is subtle. New side and front mouldings, larger side indicators and side markers, and clear headlight and tail light lenses freshen the S40 and V40. On the V40, the panel between the tail light is restyled to be more integral. The front spoiler has been moved forward and has a more integrated and powerful look.

Beyond improved fuel consumption and cleaner emissions, Volvo’s approach to environmental protection concerns full-life production of its vehicles. All S40 and V40 models are now accompanied by an environmental product declaration which describes the environmental impact of the car in detail from manufacture to recycling.

The environment inside the new S40 and V40 is as friendly as possible. All leather and textiles in the S40 and V40 carry Oko-Tex eco labels.

The S40 and V40 is fitted with air and particle filters to improve air-quality inside and occupant comfort. The particle filter removes pollen and dust from air entering the passenger compartment. Also, as standard equipment, the active-carbon filter further cleans in-coming air by removing harmful toxins such as hydrocarbons.

Engines are made of aluminum to reduce weight and fuel consumption, and also to give the S40 and V40 a 60/40 weight balance for better handling.

Ninety percent of S40 and V40 components are recyclable. Plastic components weighing more than 50g are labelled for recycling. As well, the plastics are designed for quick disassembly for ease of recycling.

The standard central locking remote control uses a radio signal and rolling code to prevent unauthorised recording of the code.

Home-safe lighting is standard on S40 and V40. Pulling the high-beam lever once after removing the ignition key turns on the head lights. They switch off automatically in 30 seconds.

S40 and V40 buyers can select from four sound systems - as basic as FM radio cassette with 2x25 watt amplifier, or as comprehensive as AM/FM with single dash CD and 10-disc CD changer with 4x25-watt amplifier.

The V40 wagon has an upgraded bass speaker with integrated 80-watt power amplifier to give the sound system more bottom-end punch to the open interior.

A hands-free car phone set is available as an accessory.

If the doors are unlocked but not opened, the doors will automatically relock themselves in two minutes.

The interior lighting is switched off with a 25-second time delay when the car is locked.

If a door is left open, the interior light remains on for a maximum of 15 minutes. 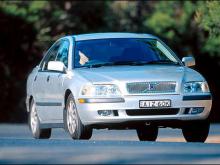 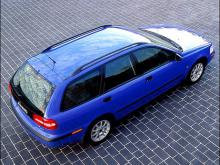