(De)Evolution of the BMW 3 series ventilation and heating systems

I have a strong disliking of the climate control system in my BMW E36, but in my previous E30, the controls for ventilation, heating and air conditioning were near perfect.

Let's look at the E30 system. There are controls for fan speed, temperature, air conditioning, recirculating mode, and individual controls to vary the flow to the windscreen, face level, and feet.

With the fan off, you could still have natural airflow if any of the position controls were open, and recirculating mode was not on.

You could vary the flow of air to any level, however you liked.

It has dual temperature controls. Sure it's nice to have the system automatically maintain the temperature but I've never been a fan of dual systems. Most of the time I find myself setting both temperature settings the same, so it's just two controls to adjust each time. Also, in every E36 I've owned the solenoids that manage the coolant flow for this function have failed.

Then there's a fan speed control. Again, it's nice there's an automatic mode that adjusts the fan speed to maintain the temperature. But there is no way of having natural airflow. It's either fan and airflow on or off altogether.

There's buttons to enable airflow to the windscreen, face level, or feet level, including an automatic mode (which I'm not sure what it does - presumably make all levels of the car the same temperature. You can't have a little flow to one area, and a lot to another like you could on the E30.

Even though I've owned several E36s over quite a few years I am still unsure how to control this. Does it still blow hot air to the face if I have the climate control set to a low temperature but the face level vent set to heat? If I have the face level set to cold but the climate control set to hot what temperature do I get? It seems such a pointless system.

The E30 system was reliable except for the fan motor resistor pack which failed due to loose rivets or a dirty switch contact. The E36 system has the common problem with the coolant solenoids that I mentioned, plus the electronic control module itself is prone to problems with capacitors.

Sometimes the simpler the system is, the better it is. I miss my E30. 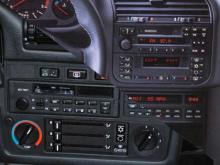