Ever since I bought my 318is I have always felt it would benefit from a lighter flywheel mainly as it is particularly slow to drop revs on upchanges. It would probably also help acceleration too.

According to Julian Edgar in his book 21st Century Performance, it is reasonable to reduce the weight of a flywheel by up to 30 per cent before any significant degradation of smoothness and drivability occurs.

Unfortunately the 318is (or at least most 318is's) have a dual mass flywheel which from my inquiries is not possible to remove weight from as with ordinary flywheels. Many machine shops will not even machine flat dual mass flywheels (ie. usually done when replacing a clutch) and those that do often won't give any guarantee on it's quality after doing so.

So it seems that if you want a lighter flywheel on a 318is you need to purchase an aftermarket light weight flywheel which typically cost at least $700 USD. The other option though is to fit a conventional flywheel from another BMW model.

From information contained on BMW's ETK (parts catalogue on CD-ROM) it seems that there were three flywheels fitted to the 318is over the years. The initial 1989 models were apparently fitted with the M40 conventional flywheel which weighs 9.973kg but later models were fitted with a 11.45kg dual mass if they had air conditioning or a 12.25kg dual mass unit for models without air.

The M40 flywheel is a bolt-in replacement for any generation of M42 (E30 or E36) as well as the M44. To replace the standard dual mass flywheel with the M40 unit you need just the flywheel, clutch (usually purchased as part of a kit which includes pressure plate and throw-out bearing) and the shorter bolts from the M40. Unlike the M42 clutch, the M40 clutch has a sprung centre.

It is also possible to fit a flywheel from the 1988-91 325i. This modification requires a 325i clutch and flywheel, 325i pressure plate, 325i drive pinion for the starter motor and a E21 (1978 - 1983) 323i throw-out bearing. You will need to remove the spacer from the M42 flywheel (attached with rivets) and will also need shorter flywheel bolts.

The following table compares the weights of the various components for these options:

According to the BMW ETK (parts catalogue on CD-ROM), the above flywheel choices weigh as follows: 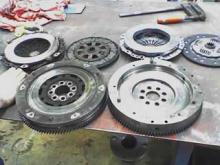 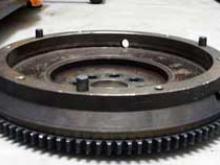 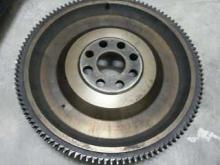 My new M40 flywheel and clutch: 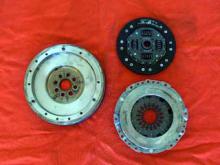 My old M42 flywheel and clutch: 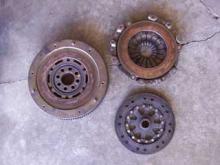