As I need to replace the clutch in my supercharged 1998 318is I have been looking into what options there are for a stronger and preferably lighter clutch.

I presume my car has the original dual mass flywheel and clutch so I could go with just a new clutch kit. However, I have concerns that the flywheel may not be in good condition and it is not advised to have dual-mass flywheels machined so there is a risk to just changing the clutch.

I would also prefer to replace the clutch with one that could handle the extra power from the supercharger better. There are a few choices in stage 1, 2 or 3 clutch kits for M42/M44 powered BMWs on eBay USA which is another option, but again I would prefer to replace the flywheel as well.

I did the M40 flywheel swap on one of my previous 318is's and I can't say I noticed much or possibly any difference in performance or driveability. I did notice a small increase in the amount of vibration and harshness, but really only when at low engine speeds under load, for example when taking off from rest uphill.

Valeo make a solid flywheel conversion kit for the M42/M44 but it is designed as an OE replacement and the flywheel is comparable in weight to the dual mass unit. I can't find any specifications but I presume it is the same size as the original, although one Australian retailer implies it is 235mm (they could not confirm to me if this was true). Assuming it is the same weight and the same size then this seems like an expensive alternative to the M40 flywheel swap. The Valeo part number for the M42/M44 is 52161203.

Clem, who fitted the Valeo kit to his M44, says that the kit includes everything needed including flywheel bolts and is a direct fit. He prefers the more direct and precise feel but says there is some chatter when the air conditioning engages and disengages.

Clem also says, "But the clutch feel IMO is exactly where I like it. Direct and slightly harsher if you don't throttle it correctly. Very precise feel so if you get the throttle wrong for the speed you want to take off it can really mess it up. Clutch chatter is definitely obvious as per the reviews and daily start/stop traffic can really start to annoy if the clutch disengagement vs throttle is not synchronised to the speed of take off."

The solid flywheel from the M20 engine, usually the later model E30 325i, seems to be the most popular upgrade. Not only is it lighter (and can be lightened further) but it is also larger (228mm). My issue with this is that it is a more complex swap - you need an M20 flywheel, shorter bolts and an M20 clutch kit. But as the starter/ring gear is different you then either need to swap the ring gear, use an M20 starter (not all fit) or swap some of the M20 starter parts with the M4x starter. Then there's confusion about which throw out bearing to use - the majority say get one from an E21 323i but some say the one that comes with the M20 clutch kit works fine. Lastly you either need to remove some material from the flywheel or remove and fit the spacer from the M4x flywheel (riveted on and needs one hole drilled larger to fit) to stop the M20 flywheel from jamming against some bolts on the back of the engine.

I have read about another option. Apparently, the M50/M52/S50 flywheels and clutches fit too. I have heard that they will only fit E36 models, as the pressure plate is too deep for the E30 gearbox.

There isn't many people talking about this but the ones that are use an aftermarket solid flywheel from an E36 M3 3.0 with the clutch kit from the same model. The advantage is that the clutch diameter is 240mm and obviously designed for the M3 so should be up to extra power of a supercharger. The ring gear is the same so the starter does not need to be changed. One person mentioned they needed to fit the slave cylinder from the M3 too as the original didn't handle the extra pressure. The negatives of this are that the cost of M3 parts is generally much higher (clutch kit is around twice the price).

Apparently all M50/M52/M54 flywheels will bolt straight on without any modifications. All use either a 228 or 240mm diameter clutch plate. Most of the M50/M52/M54 flywheel and clutch combinations weigh around the same as the M42/M44 parts, and some are a little lighter. There is also apparently a conventional flywheel available for the early M50 (E34 525i and E36 320i) without air conditioning although I doubt any of these made it out of Europe and the weight is similar to the dual mass flywheel/clutch combination.

Update 1 April 2015: I ended up buying a second-hand flywheel and clutch from an early M50 engine. I paid A$150 and as the clutch plate was in very good condition I decided to use that rather than buying a new clutch kit. I did have to get a new throwout bearing though. You can read more in my post but the M50 parts were a direct replacement and no further changes were needed.

Update 7 May 2020: Salvatore fitted a dual mass flywheel from a M52B28 to his M43TU powered Z3 that has been fitted with a supercharged from a Mercedes SLK230. He said the M52 parts are about 4mm longer but this didn't prove to be a problem. The only issue he mentioned was that the hole for the pin to lock the engine when replacing the timing chain does not line up. The M43 flywheel is 228mm and weighs 19.6kg in total and the M52 is 240mm and is actually lighter at 17.4kg, and Salvatore says it goes a bit better than before.

Recently I discovered that the M43TU engine fitted to the E46 318i (and maybe some E36 Compacts) uses a 228mm clutch plate. The earlier M43 engines can use the same clutch and flywheel options as the M40/M42/M44 so there is a good chance the M43TU flywheel will fit the M40/M42/M44 too. The downside is that the flywheel is a dual-mass type so there wouldn't be any weight saving with this swap. I am yet to confirm that it is even possible and there certainly doesn't seem to be any discussion about this online. 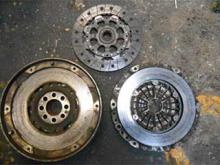 I found a company in Sydney (Australia) that sells a lightweight flywheel for the M42, M44 and M50 engines for a very reasonable price. They say it uses the original M42/M44/M50 starter motor. You use a clutch is for the M20 engines (228mm), including any aftermarket options with a higher clamping force if needed. Weight is 3.2kg (7lb). See RHD Engineering. Shame I didn't know about this before I fitted an M50 flywheel and clutch.

Here is the weights of the various options:

*My scales is my own measurement using simple bathroom scales.
**Weights provided by Salvatore Pepe
***There are various M20 clutch kits available that vary in weight

I am still investigating the options so will keep this page updated.