I've been looking at buying an E46 BMW 3 series and have been looking into which engines are reliable and which are not. I'll keep this post updated with any information I find, and welcome any feedback.

The M43TU engine seems to be a reliable choice. It has a timing chain.

Common problems include failure of the mass airflow sensor.

Common problems include timing chain jumping teeth usually due to a faulty timing chain tensioner. An updated part is available. This problem has also been known to be caused by a worn or broken timing chain tensioner guide (possibly caused by the faulty tensioner allowing the chain to move around a lot more than intended), which is a plastic part. Look for rattling noise on startup, although it can be difficult to determine.

You can see if the engine is fitted with an updated timing chain tensioner by the size of the tensioner's hex head. The updated design is the new, clean tensioner in the image below. 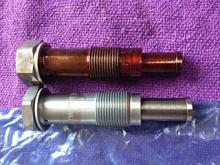 These engines requires regular oil changes using a good quality synthetic oil. Anything less could cause sludging and contribute to the timing chain problem mentioned above.

An Internet search for problems on these engines reveals many discussions and a lot of people have had problems which despite being looked at by various BMW dealers and specialists were difficult and expensive to rectify.

It seems this engine was not one of BMW's most reliable.

Fitted with timing chain and variable valve timing on both inlet and exhaust valves. Aluminium block which means that it doesn't like overheating and head gasket replacement can result in stripped threads. Some oil consumption problems due to either Nikasil cylinder linings, bore glazing or oil separator valve. Many engine blocks were replaced under warranty.

Like most of BMW's VANOS equipped engines, the M52 can suffer problems with this system.

Has some improvements over its M52 predecessor, but one major issue.

BMW switched to a different type of oil scraper piston ring which may not last long. When these wear out the engine will use a lot of oil. The fix is new rings - either aftermarket or use M52 oil scraper rings.

The other cause of excessive oil consumption is the oil separator, like the M52.

There can also be problems with the VANOS system.