The main differences between these models are the engines, of course, so my comments will be directed this way, rather than comparing things like suspension characteristics. Also, I will be talking about 318is's with the M42 engine rather than M44, although the two are very similar so most comments should apply to the M44 as well.

Let's start with fuel economy. Fortunately, I have driven both models over the same route day after day so I have an accurate comparison. The 318is wins of course, averaging 8-8.5 l/100km. The 325i is surprisingly not far behind at around 10.0 l/100km, a difference of 1.5 to 2.0 l/100km. What is the difference in fuel cost I hear you ask? If we used 400km a week as an example, then the extra 6 litres per week at A$1.50 per litre will cost an extra $9 which is $468 per year. Incidentally, both models require a minimum of 95 octane fuel (premium unleaded).

Now, moving on to the engine characteristics. Compared to the 318is, the 325i engine is so much smoother. It's not that the 318is is harsh, just that when you drive them back-to-back you notice how much smoother the six is. It also makes a beautiful noise, with different noises at low and high speed that will all be appreciated by enthusiasts. The four-cylinder is more noise than music. It might just be my 325i, but the six-cylinder is the louder of the two models (not a complaint).

Both engines are happiest at higher rev's. I find even the 325i a bit of a slug at lower engine speeds, which came as a bit of surprise. Below somewhere around 3,000 rpm I don't think there is too much difference in performance. Of course, the 325i has the edge but the difference doesn't feel that great. Both cars accelerate well above 3,000 rpm (325i) or 4,000 rpm (318is) and are well suited to motorway driving where they have strong acceleration even in top gear around the legal limit. According to road tests, I have read the difference is about 2 to 2.5 seconds for zero to 100 km/h.

Maintenance-wise both cars have timing chains, automatic adjustment of valve clearances (hydraulic) and distributor-less ignition so maintenance items are similar and can be as simple as fluids, filters and spark plugs. The only differences being in the favour of the four-cylinder model, which are ease of access (there's a lot more room at the front of the engine particularly), and volume of fluids required (the 325i has a much larger oil capacity).

It's fairly common knowledge that inline six-cylinder engines are more likely to go through head gaskets, although I am not sure if this is a common issue with the M50 engine.

My 325i is an early model. Later models have variable valve timing (VANOS) which is known to be problematic and require maintenance and repair over time. None of the 318is engines has VANOS.

So, in summary, the 318is is the economical choice but still offers good performance. If you want to win traffic light grand prixs or you favour engine music over the radio then the 325i is by far the best choice. 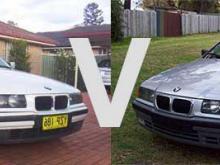