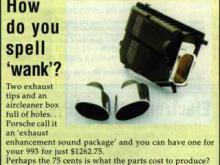 To get an idea of what changes to the car's sound could be made I removed the intake tube from between the airbox and the plastic cover behind the left-hand headlights. Driving the car at normal (leisurely) speeds without this tube caused no significant increase or change in sound. But when the throttle was opened wide, and particularly from 3000-5000rpm, there was a substantial increase in sound.

Convinced that there was some merit to the idea, and hoping that by drilling some holes in the side of the airbox might produce an increase in sound quality and volume somewhere between stock and the removed tube test I decided to do it.

I first checked with some local second-hand part suppliers as to the availability and price of another airbox should the modification not produce the results hoped and found one for $60 AUD.

Now the question was how many holes to drill and where to drill them? From the picture of the Porsche airbox I could see that they added around 150 holes. I decided to start with around 50 holes drilled on the side away from the engine so as not to draw to much hot air in (hopefully). If the change was not enough for me then I could always drill more holes.

I drew a grid on the side of the airbox and drilled 47 nice neat holes of around 4mm diameter and then rounded off their edges both inside and out to smooth airflow.

The result was slightly more "induction roar" at certain engine speeds when driving enthusiastically, with noticeably more noise around 4000-5000rpm if using full throttle. I am reasonably pleased with the result but may drill a few more holes next time I can be bothered to get the airbox out. 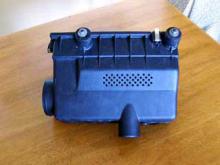