For several years I've had a strange knocking type noise coming from my car.

I've tried to solve it myself, and replaced several parts. I've also sought expert help on a couple of occasions but no one found the problem.

Recently it had gotten worse and was sounding like driving on train tracks which was noticeable from about 40 km/h and really annoying at 80 km/h.

This time when I was checking one more time for what it could be I lifted the rear end and ran the car up to about 60 km/h while on jack stands. I put a pipe against various parts like the differential and the suspension on each side but I couldn't hear the noise.

But when I looked at the spinning wheels from behind I noticed the left wheel was moving from side to side. (video attached)

On closer inspection, and after trying a different wheel, it seems that the wheel hub was bent. We had previously discounted the possibility of a wheel bearing issue because it had been replaced not long before the noise started, but the mechanic who did that job told me he had a lot of difficulty getting the hub and bearing out on that side. It appears the hub had been damaged in the process but was not changed at the time.

So, after several years the noise is finally gone after fitting a new hub and bearing. 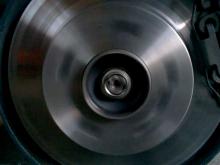