The B is for Build Eleanor Ford Mustang project is over

If you've been wondering why there have been no new progress videos for B is for Build's Ford Mustang project, well that's because it's over.

Why? Apparently, Eleanor is a copyrighted movie character and the copyright owners objected to B is for Build building a replica. Lawyers were involved and the build was stopped.

The Eleanor character is legally owned by Denice Halicki who licensed the rights to Walt Disney Studios Motion Pictures.

Sadly, all previous videos have now been deleted and even worse, the car was given to the copyright holders. Ouch.

Here's the video where Chris gave us the bad news:
www.youtube.com/watch?v=m9EugvXW09E

The comments were full of lots of anger directed towards the copyright holders. No surprise there. There's even an online petition to try and get the car back (www.change.org/p/the-walt-disney-company-give-b-is-for-build-his-mustang-eleanor-back).

Expect videos on the team's armageddon cars as the next videos you will see on the channel. 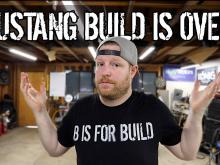