Magazine articles about driving across or around Australia

A trip across or around Australia is the ultimate road test and several Australian car magazines have undertaken these journeys in various cars over the years.

In a two-part series in the November and December 1998 issues, Motor (Australia) magazine took the freshly released AU Ford Falcon and a VT Commodore on a trip around Australia on Highway One.

The journey was planned to be close to 15,000km over 19 days. They were not trying to break any records, just wanting to compare Australia's top two sporting sedans of the time in a massive endurance test. They had a planned overnight stop at the end of each day of driving, so as to avoid more dangerous nighttime driving, and a couple of rest days.

They chose an XR8 and an SS, both with manual transmissions. Preparation consisted of just adding an extra spare wheel and tyre and carrying a few spare parts, and the addition of cruise control to the Commodore - not usually an option for manual models.

They left Melbourne and headed clockwise around the country, first to South Australia.

They quickly found that the Falcon had gearing better suited to overtaking yet it used about half a litre less fuel per 100 km. But they found its front seats very uncomfortable.

Over the next two weeks of driving, they had travelled through Western Australia, Northern Territory, Queensland and New South Wales. The group of four drivers consisting of journalists and a photographer had concluded that the Falcon had better performance and handling, and superior fuel economy and equipment levels. The Commodore was also praised for better comfort and refinement.

Both cars had a few fairly minor issues along the way but nothing serious enough to stop either of them. The Commodore used a not-insignificant 2.5-litres of oil, and a Holden dealer along the way found the steering rack bolts were loose. The Falcon had an issue with a sticking window, CD player and developed many annoying interior rattles.

Sadly the Falcon never completed the trip. On one of the last legs of the journey, between Brisbane and Sydney, the driver of the Falcon had a moment of fatigue and ran off the road totalling the car. It was a very disappointing end to what was a huge undertaking by Motor magazine but fortunately, no one was hurt.

Car Australia documented a similar trip around Australia in the March 1987 issue.

The last section unpaved section of Highway One had been paved with bitumen in late 1986 and the magazine took a VL Holden Commodore SS on the 14,194 journey.

The freshly serviced Commodore was equipped with an extra spare wheel and tyre, some spare parts, plastic headlight protectors, jerry cans, some tools, a CB radio and a radar detector.

The two drivers, Assistant Editor Angus Mackenzie and photographer David Segal, started their trip in Melbourne and headed in a clockwise direction to Adelaide. On day two they crossed the Nullarbor and into Western Australia for day 3.

Although they had concerns about the 63-litre fuel tank not being adequate for the trip, they average 13.2 to 15.2 l/100km/h which is enough for them to make the large distances between petrol stations.

It wasn't until day 8 that they until they entered the Northern Territory, where they were able to increase their average speed thanks to the absence of an open road speed limit. In some sections, they cruise happily at 160km/h.

They have a close call near Katherine where the hit a pile of sand washed over the road by recent thunderstorms. The car is undamaged except for some scratches on the underside of the spoiler.

In Darwin, the Commodore gets a service at a Holden dealer. The LSD had become noisy so was also given a fluid change, and the idle speed was adjusted.

The Scheel seats proved to be comfortable, though they don't like the Momo steering wheel. They are impressed with the chassis and directional stability.

The cross into Queensland on day 10 where they reported that the highway deteriorated and became narrow and bumpy with sharp drop-offs.

The traffic picks up and on day 13, as they are travelling from Brisbane to Sydney, they are in the thick of it but using the torquey V8 to quickly and painlessly overtake slower traffic when the opportunity arises.

In the November 1980 issue of Wheels (Australia) magazine, Peter Robinson and Steve Cropley detailed their "record-breaking" non-stop trip from Sydney to Perth.

They had done the same trip three years earlier in a 4.9-litre XC Ford Falcon (July 1977 issue), setting a time to beat of 32 hours and 56 minutes.

They had contemplated trying to beat their time and took advantage of an opportunity to do the trip in an Alfa Romeo Alfetta sedan, not Robinson's first choice, but he was convinced by a local Alfa dealer who wanted to move three cars to Perth and show that the distance could be done in a weekend.

The sedan was chosen rather than a coupe so as to avoid attention from the police. The car had already done 16,000 km and they fitted an extra 70-litre fuel tank in addition to the standard 49-litre tank. They also added driving lights, Koni suspension and a radar detector.

The two drivers departed Sydney (Terry Hills) early on a Sunday morning, at around 4:30 am.

Imagine their disappointment when they had to stop for several minutes at the first set of traffic lights that they came across!

That was the one and only light they would have to stop at for a long time, and they headed out of Sydney via Richmond and Bells Line of Road.

They reached the first driver change after 412 km, and Robinson handed the car over to Cropley who had not even driven the car yet. He accelerated up to 160 km/h but found the Alfa understeered excessively at the first corner, only narrowly succeeding in keeping the car in the road.

They stopped for fuel after 582 km, in Nyngan, where they took on 107 litres.

They believed the next section would be their fastest as they had fresh drivers, daylight and wide vacant roads ahead. Their cruising speed was stepped up to 170 km/h -- until they went over a crest and found a herd of sheep blocking the road. After this close call, the dropped their speed to a "safer" 150 km/h.

At Broken Hill, they had a prearranged meeting at their fuel stop with a dealer mechanic. They tell him about their concerns of low oil pressure at high speeds and some issues when they had when switching between fuel tanks. Having travelled 2,400 km to meet them, the mechanic tells them not to worry and they are on their way again in only 8 minutes.

They can continue on to Port Augusta, where they had taken a wrong turn back in 1977, but this time take the correct route. They had an arrangement with another dealer there in case they needed any assistance, but they had no new problems to report so only briefly stopped to say that the car was running perfectly.

Robinson went in and out of sleep until his turn to drive at the next stop at the Western Australia border. However, after only a short time at the wheel, he had to admit defeat and let Cropley -- now nicknamed Superman -- take over again. Robinson tries again later after Coolgardie and lets Cropley gets some much-deserved sleep.

Two hours out of Perth the engine starts losing power and their average speed starts to fall, but the problem soon fixes itself and returns to normal.

29 hours and 14 minutes had elapsed since they left Sydney as they reach their destination. As Robinson parks the Alfa he crashes the driving lights into a wall - the conclusion to a very long journey.

They averaged close to 140 km/h for the trip and published this and all of their hourly averages (some over 160 km/h), and wrote about driving at speeds of up to 190 km/h. Could you imagine a magazine publishing a story like this today?

PS. Steve Cropley wrote an article about the trip that was published in Car (UK), November 1980.

I hope to get my hands on the Wheels article from 1977 to read about how the trip in the XC Falcon went, and I'm sure there have been other similar articles. If you know of any others please let me know. 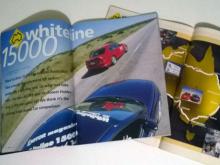 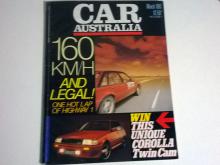 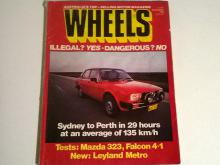 Modern Motor/Motor magazine also did around Australia trips in 1979 and 2004. See my other post here: www.motortraders.net/posts/1769-motor-magazine-driving-around-australia-records