Yet more magazine articles about driving across Australia

In 1977 Wheels magazine planned a 4,000 km trip from Sydney to Perth to see how quickly a pair of competent drivers in a good car could make the journey. They also wanted to test the car under these driving conditions and also to check the state of the roads. They estimate a time of 35-hours, an average speed of 115 km/h although they weren't planning it as a record attempt.

The drivers would be Peter Robinson, editor of Wheels and Steve Cropley.

For the trip, they used a Ford XC Falcon 500 GS pack that they had on loan from Ford that was specially equipped for the trip. It had a tall ratio limited-slip differential, 4.9-litre V8 engine, four-wheel discs, air conditioning, tape player, and a 125-litre fuel tank.

They take tools, some spare parts, the obligatory radar detector, and two 20-litre drums of petrol for where they think they won't have sufficient fuel range.

At two o'clock on a Monday morning they depart from Terry Hills in the north of Sydney and head west, using Bells Line of Road to Lithgow.

Outside of Bathurst they up their cruising speed to 140 km/h and take a route through Nyngan to Broken Hill and then to Port Augusta.

The first stop for fuel is at Nyngan as the sun starts to rise, a distance of 581 km. Fuel consumption works out at just over 19 l/100km.

At Wilcannia they fill up again and the fuel consumption works out this time to 28 l/100km -the result of an average speed of 176 km/h for the section. They are now concerned about their range when they cross the Nullarbor.

They consider lowering their speed to improve fuel consumption but decide instead to keep moving at 160 km/h plus.

At Broken Hill, they take a quick lap of the town as Cropley shows Robinson around the place where he was born and grew up.

At Peterborough, they fill up again and record a slight improvement in fuel consumption. However, they only just made the last 490-odd kilometres, so they have concerns about a 707 km section from Eucla to Norseman that is coming up.

At Port Augusta, they take a wrong turn and travel an extra 60 km which costs them 40 minutes.

Robinson makes up time by travelling the next dirt section at 110 - 130 km/h. They don't find out until their return trip but they had damaged one of their tyres on this section. At the same time, they also discover that there is no jack in the car.

They run out of fuel and have to fill the car at the side of the road from the extra fuel drums they were carrying, but they struggle to get back on the road from soft sand on the verge. With the help of the LSD and Cropley pushing they finally ease it out.

The sun starts to set as they head towards Eucla, which makes it hard for the driver to see. As dusk approaches they drop their speed to 120 - 130km/h.

Both drivers start to run out of energy throughout the night, and instead of two-hour intervals, they switch drivers every hour or 30 minutes to stay awake.

Their slow progress through the night at least results in more acceptable fuel consumption, around 13.5 l/100km, and their overall average speed - 125 km/h - is still above their target. 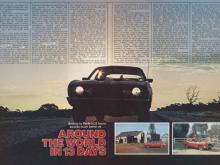