I was hopeful that the new PCV hose would solve my idle/stalling issue but unfortunately it did not.

It was fine for the first short test drive, but on a longer test drive the next day the same problem surfaced once the car was hot enough.

I am still waiting on the new coolant tank to arrive so attempted to seal the leak with some plastic soldering but that didn't end up holding up too well on the test drive.

I was able to read the fault codes and there was just one code of P0190: fuel pressure sensor. This seems to be a common fault code on these models, but can sometimes be misleading.

After clearing the codes the problem changed and instead of idling too low and stalling it idled too high and cycled up and down above 1,000 rpm.

I'm now unsure what to do next. I guess I should replace the fuel pressure sensor and see what happens but I'm not confident that is going to fix the issue.

To further demoralise me, the car also showed an anti-skid system error message. It sounds like these ABS units suffer from bad solder joints similar to my BMW's unit which I was able to fix myself, so hopefully, I can do the same with this one. 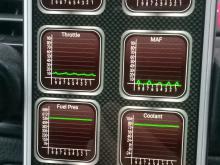 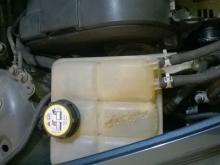