Update #4 on the project Volvo V50

Not much has been happening with the V50 because I have been waiting for parts to arrive.

Some new wipers came in which I have fitted. I am impressed with the type of wiper attachments Volvo has used. Instead of the usual hook, Volvo has a simple button-lock system to replace the wiper: press the button and pull out the old wiper blade, then push the new one in until it locks in place.

Since my last update, I had read that bad connections to the CEM module is a common cause of problems, including electronic throttle module and ABS problems, so I removed my CEM and cleaned all of the connections.

The cabin filter is in the same area as the CEM and because this car was previously owned by a smoker I thought it would be a good idea to change the filter. These are not easy to get out on this model! Accessing one of the three screws that hold the filter cover in place is difficult, as is removing the filter itself. I tried to remove the glovebox for better access but that proved too difficult so I just wrestled the old filter out.

It turns out the filter was the original Volvo part and extremely dirty. a lot of material had built up in the filter housing so that was vacuumed out. The original filters are not very flexible so are hard to get out (and probably impossible to get in without removing the glovebox). I left it all apart waiting for my box of parts to arrive, which included a new filter.

On parts day I first started on fitting the new fuel pressure sensor. I started by releasing any fuel pressure through the Schraeder valve, and then pulled out the old FPS (which is not so easy as there is not enough room to use a Torx driver) and fitted the new one. Next step was to reinstall the intake manifold and connect up all of the wires and air hoses.

On to the cabin filter. Fortunately, the replacement filter (Mann brand) is very flexible and went into place quite easily. I lost one of the screws under the carpet in the process but it all went back together reasonably easily. I reattached all of the CEM connections and that also went back into place without any issues.

I made a few checks then started the car, checked for any fuel leaks, then went out on a test drive. After 15 minutes the car was driving well with no idle issues or stalling and I was starting to think the problem was solved... Until the problem returned.

I've included a photo of Torque OBD scanner logging various systems when the problem is happening. The throttle graph is suspicious but I don't know whether it is the cause of the issue or a reaction to it. It does make me think that the ETM is a likely suspect.

Some good news is that fuel pressure stayed good and there are no longer any fault codes for the fuel pressure sensor. Also, there are currently no ABS errors so maybe that could have been caused by bad connections to the CEM.

The plan now is to try again to heat some components and see if I can induce the fault when the car is cold. I've bought myself a heat gun that is much more capable of quickly heating things up, and I think I will start with the ETM and maybe the MAF. I also read about the possibility of coils causing stalling, although that doesn't seem likely to me, and apparently, wiring problems are not uncommon.

I've also got a used ETM and MAF on my eBay watch list as plan B. 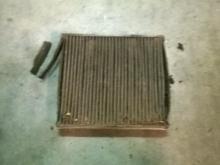 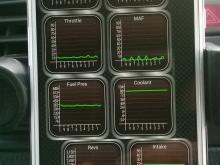 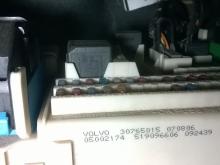