It has now been over two months since I bought this car. In this time I've fixed a few issues but been unable to fix what I considered the major problem which is the idle quality and stalling when hot.

Here's an update on what's happened since my last post.

I got around to doing a coolant flush. I opted to use the method where you drain as much as you can through the radiator drain plug (which is only about half of the total capacity), fill with distilled water, run the engine and then repeat this over and over until there is no sign of any coolant any more. I think I did 4 empty and fill cycles over 4 days before I deemed it good enough to refill with coolant. The final step is to fill with coolant concentrate that is designed to mix with water 50:50.

I have ordered CV boots as one of the inner boots has a split and is making a mess and likely to be destroying itself. Hopefully, I caught it in time as the genuine replacement CV shafts are expensive and the cheaper brands are often not very good so people say to avoid them. I still have to fit these so in the meantime I have wrapped the boot in plastic so I can still test drive and also to degrease the underside of the car.

And it needs quite a bit of degreasing as there is oil over the steering rack and several other places.

Given the mess, I thought it worthwhile to check the power steering level but needed Google's help to locate the reservoir as I didn't know it was hidden under the headlight. Fortunately, the headlights are surprisingly simple to remove. Sure enough, it was low on fluid so I ordered the correct fluid and topped it up.

I found a cheap set of four of the same Zaurak 17" wheels. For A$200 - about the price of two cheap tyres - I got three wheels that have less gutter rash than what I have, two of which have good but cheap Chinese tyres. One of my wheels was bent so I could replace that and both of my front tyres were worn out. One of the new wheels is also bent.

The new tyres are the factory size (205/50R17) which I was wanting so that I could see if a standard wheel would fit in place of the space saver. Unfortunately, although it fits, the cargo area floor does not sit level with the floor. I have read that there is something the factory fits to raise the floor so I will investigate that further.

Finally, after a long wait, my Volvo diagnostic equipment arrived from China (VX Nano, which is compatible with DICE) but it took me a day to get it working and then it proved to be of little - possible zero - help.

It showed some fault codes with non-engine systems and only two faults relating to ignition coil wiring and multiple misfires, but both fault codes didn't reappear after I erased them and ran the car long enough for the idle/stalling issue to occur.

Whilst I was testing the car I noticed some coolant loss and later discovered much of my newly replaced coolant on the garage floor. Turns out one of the radiator hoses has failed. Like most parts of this car, Volvo decided to over-complicate the hose and add a T-piece in the middle of it to distribute coolant to various places. Another $60 spent on a new hose which I have to wait to receive. The only bright side is that the car is not automatic, as that hose is even more complicated and probably even more expensive!

Replacing the radiator hose requires quite a bit of disassembly, mainly the intake manifold and the airbox. Since the intake was off I decided to finally look at the spark plugs. All (Volvo-branded) spark plugs looked well-worn but the worst part is that the plastic connectors on the coils have become brittle and have broken apart, which might make it impossible to connect them again securely. Five replacement coils are not cheap so I will have to wait and see if they can be reconnected securely somehow.

When I knew the Volvo diagnostics was arriving I foolishly put my other daily-driven BMW 318is up for sale and that sold within a couple of hours. I did tell the buyer that I needed the car for another week which they agreed to but I am now in the position where I might shortly have no car to get to and from work.

My hope now is that the new spark plugs and coolant hose arrive quickly and that if I am extremely lucky the spark plugs and coil connections might be the cause of my idle/stalling problems. Either way, once the cooling system is repaired I plan to be using it as my daily transport, stalling or no stalling. That should be interesting... 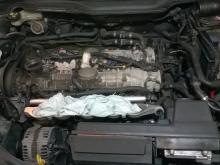 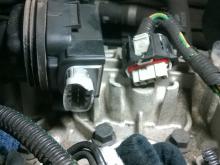 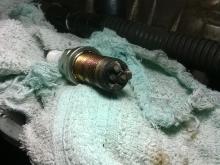