I recently bought a VXDIAG VCX NANO device which can be used with Volvo's VIDA software to communicate with Volvos from the early 2000s up to 2014 or so.

The device is claimed to be compatible with Volvo's DICE hardware.

I chose to buy one of these rather than a DICE or DICE clone because (A) these are a bit cheaper than DICE clones, and (B) I have read that many people have had problems with faulty DICE clones.

I had to wait two months to receive the device from China, but this is fairly typical of deliveries during COVID-19 times.

I first tried to use it with a VIDA installation I had already done using a virtual machine image obtained from the swedespeed.com forums. It didn't work, I just kept getting an error message: "ERROR: SDK GetProcAddress!"

Eventually, I decided to actually follow instructions and installed VIDA 2014D from the installation DVD that came with the device. It worked first go.

I later tried again to get it working on the VM but without success. I suspect the problem may be due to the VM running Windows 10 and being 64-bit. The recommendation for VIDA is Windows 7 Professional 32-bit.

Using VIDA I can connect to the car and read it's details, fault codes and live data. I can also use the activate feature to turn on and off various systems for testing.

I have not tried any programming.

I also used the device with VDASH2 and it also works fine for reading information and fault codes. I have not tried any programming with VDASH2 either.

So aside from not being able to comment on programming, I can recommend the VX NANO as a cheaper alternative to a DICE clone. Just follow the instructions and know that it may not work on a VM. 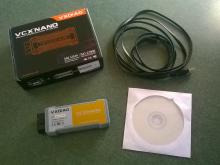